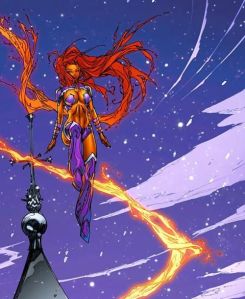 Starfire was created by writer Marv Wolfman and artist George Perez in 1980 for the twenty sixth issue of DC comics presents. Starfire is the warrior name of Princess Koriand’r of the planet Tamaran, where she was in succession to take the throne and rule. Her older sister Blackfire was jealous of not being put forward for the honour of leading the Tamaraneans and attempted to assassinate her younger sibling. After failing in her attempt she was exiled, only to return later with the bitter enemies of the Tamaraneans..the Citadel, with the help of Blackfire, Tamaran fell and Koriand’r fled the planet and made her way to Earth. She initially joined the Teen Titans where she stayed for many years and had a serious relationship with as then leader Dick Grayson aka Nightwing. Currently she can be found in the pages of Red Hood and the Outlaws, where she is teamed up with Jason Todd aka Red Hood and Roy Harper formerly known as Red Arrow, now called Arsenal.

Starfire like all Tamaraneans is able to safely absorb radiation and ultraviolet which she is then able to convert to blasts of energy, she is able to store great quantities of this within herself and release it at will. Earth’s gravity also allows her to fly at supersonic speeds and have super-strength almost approaching Wonder Woman’s capability.