← Comic Cover Of The Week: Detective Comics #934
Two Years In The Precinct… →

Pushing ever deeper into the cavernous chambers of the ancient Amazon archives we happen across an expertly crafted statue of Queen Hippolyta, the intricate design is so meticulous that it could only have been created by the Gods of Olympus themselves.

Tracing our fingers across the elaborate effigy we notice that the grandiose Sarissa spear that the likeness of the Amazonian Queen clutches in its left hand has a small catch hidden just below the tip. Lifting the catch cautiously causes the graven image of Hippolyta to suddenly drop the Aspis shield it was wielding. Upon retrieving the heavy bronze Aspis from the dusty chamber floors we notice, secreted behind the leather interior of the shield, a slim tome that can only be translated through… ‘Classic Wonder Woman’  Precinct1313’s comic cover countdown to the 75th anniversary of the Titan of Themyscira.

Once more unto the breach my Amazonian affiliates as we celebrate yet another illustrious issue from those ceaseless composers of fantastic fiction – Gail Simone, Aaron Lopresti & Matt Ryan. Wonder Woman (volume 3) #41 was released in April 2010.

This compelling comic showcases a literal Clash of the Titans, as two of DC’s heavy hitters collide head on.  Kryptonian – Power Girl is the Earth 2 variant of Supergirl and possesses the same powers and skills as her parallel dimensional cousin, super strength and speed, near invulnerability, flight and more, making her a very ferocious foe to her rogues gallery of enemies. Unfortunately for the amazing Amazon, today, all of Power Girl‘s focus is directly on taking down Diana, in a battle royale of epic proportion. 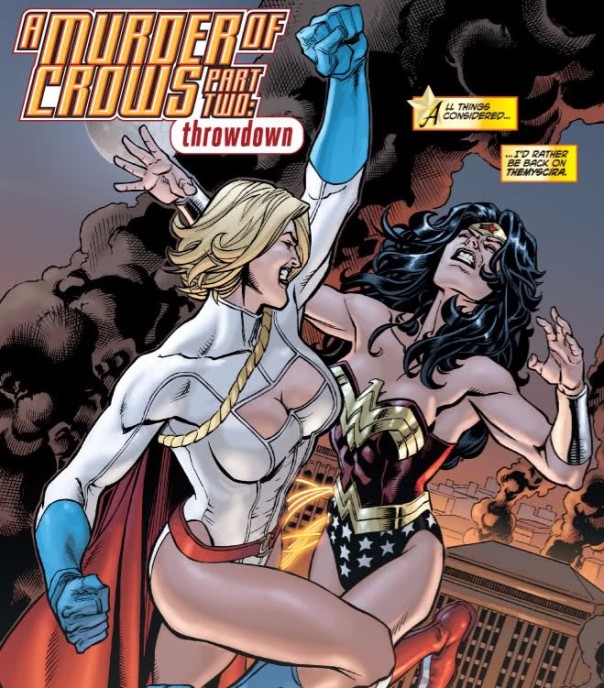 Possessed by the offspring of Ares, Power Girl believes Diana to be a fake and instantly sets about exposing the truth by attempting to pummel the Themysciran Princess with all her immeasurable might. Though the two powerhouses are equals in both strength and fortitude, Power Girl is not an Amazon and with millennia of training and combat expertise, Diana is more than a match for the raging Kryptonian. 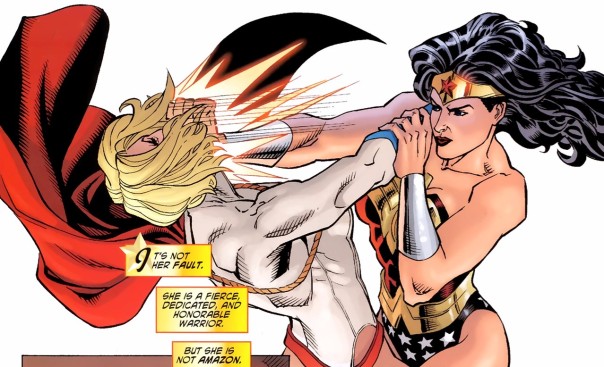 Another fantastic issue from Simone and Lopresti that pits two of DC Comics’ most loved heroines. Standout moments of this two part tale entitled ‘A Murder Of Crows’ are Wonder Woman extolling that she is “a little peeved” (after getting swatted by a down town bus that Power Girl is hefting like a baseball bat) and Power Girl punching Diana so hard she ends up across the border in Canada!

← Comic Cover Of The Week: Detective Comics #934
Two Years In The Precinct… →