Welcome fellow DC Comics fanatics to another Super-Villain Sunday, this week we present you with the main man himself, the last Czarnian, and indestructible space biker of the cosmos, LOBO!

Lobo was created by Keith Giffen and Roger Slifer in 1983, making his first appearance in Omega Men #3. Lobo is the sole survivor of his home planet of Czarnia, once renowned across the universe as an idyllic and serene paradise. That is, of course, until Lobo was born, he was trouble from the moment he was delivered, chewing off the fingers of his mother’s midwife, and frightening the nurse who helped deliver him, to death (literally!). As he grew up his unusually violent behaviour increased, as a child he murdered every guardian and caretaker he had, he was an absolute aberration amongst his fellow Czarnians, who were a peaceful and harmonious race of people. Eventually Lobo committed his most heinous act as an adult, global genocide, by creating a horde of lethal insects that slaughtered his entire race, ultimately making him the last of the Czarnians. 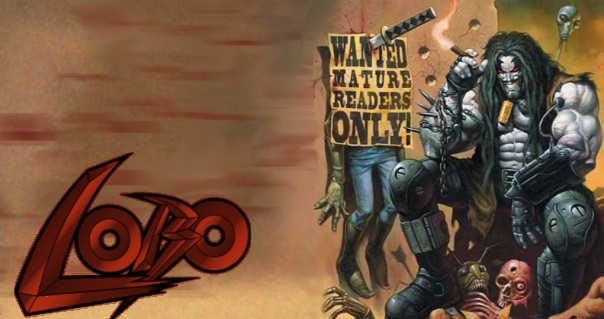 Lobo became a universal mercenary, hiring out his unique talents to the various lowlifes and organisations that could pay him enough. When Lobo first came across Earth, he decided to challenge its most powerful heroes and villains in an attempt to prove himself as the ‘Main Man’. He fought and won his initial engagements against Superman, Warrior and Justice League, but was ultimately brought down by Wonder Woman after he murdered dozens of her sister Amazons. Lobo’s powers include, the ability to replicate himself from a single drop of blood, near invulnerability, super strength and the ability to track his prey, to pinpoint precision even across galaxies.