“I am the shape of things to come, the lord of the flies, holder of the sword sinister… the death-bringer, I am the one who waits on the edge of your dreams… I am Nemesis” 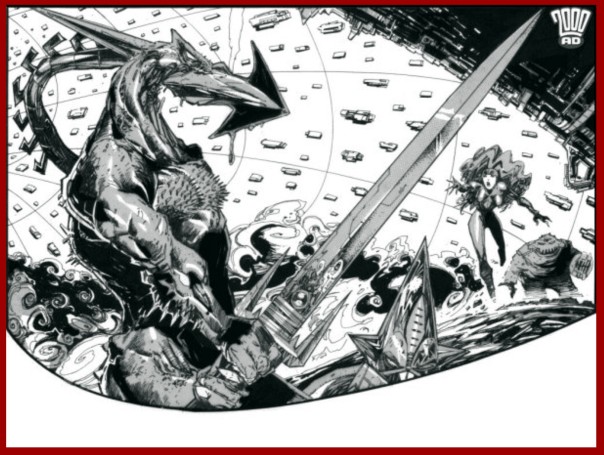 Borag Thungg my fellow Squaxx Dek Thargo, and welcome to another instalment of “Great British Comic Book Characters.” In our last episode we introduced you to the UK’s biggest selling anthology comic of all time, 2000AD and its much celebrated principal star Judge Dredd, from this episode onwards we shall be exploring in detail the plethora of other characters that make up this diverse and innovative weekly comic book compendium.

Demonic alien entity Nemesis made his first appearance in 2000AD in prog #167 in July of 1980, created by writer Pat Mills and artist Kevin O’Neill.

Protagonist Nemesis is a fire-breathing alien who opposes the tyrannical and oppressive subjugation and systematic extermination of alien races by the evil human Termight empire and their fascist leader Tomas De Torquemada. His self appointed pursuit of justice against the xenophobic human forces began after discovering that his wife Chira and son Thoth had been murdered by Termite’s terminators under orders from Torquemada himself.

2000AD prog #167 first introduced us to our eponymous alien advocate in a short story entitled “Comic Rock: Terror Tube.” This initial adventure saw our freedom fighting anti-hero escape from the clutches of the then Chief of tube Police, Torquemada, after a sustained chase through a complex tube travel system on a planet named Termight (later revealed to be Earth.) Though for his first ever appearance he was strangely conspicuous by his absence, all the reader saw of Nemesis was the exterior of his ship, the Blitzspear.

Though short, Terror Tube set the scene for the continuing crusade of Nemesis and his lifelong antagonist Torquemada, the Termight Police were modelled closely after the Spanish Inquisition and extreme right wing factions (Torquemada himself was named after notorious Spanish Inquisitor Tomas De Torquemada) which made it rather straightforward for the reader to empathise with the plight of the subjugated alien races and the violent struggle of our titular lead Nemesis. Though Nemesis himself is far from pure and virtuous, with his human aide and confidante Purity Brown ultimately realising that his mission of vengeance was primarily used as an excuse to cover his own hatred of Humanity and his mission to exterminate them from the known Universe.

Our main antagonist Torquemada began his contemptible quest as a young boy, embarking on a crusade to rid the galaxy of aliens. Betrayed by the crusade’s leader he was sold into slavery, ending up as a thrall for an alien race for over five long years. This scarred him badly leaving what little compassion and humility he possessed to be discarded, and his hatred of other lifeforms outside his own, intensified tenfold.

After his stint as tube police chief, he eventually rose to become the overriding leader of the entire Termight empire, with the assistance of his superficially religious police force The Terminators. Later in the series he became a powerful phantom like figure after losing his physical form in a bizarre teleporting accident. He continued his existence and zealous quest through the possession of a succession of host bodies, though these would have to be replaced often as the ostensibly undead host would decay at an escalated rate.

Nemesis’ continuing crusade takes place initially across ten volumes, with the odd short story inter-cutting in various annuals, one-offs and specials. Book one entitled “The World Of Termight” introduced the leading players and set the scene for the epic galaxy spanning war. Each subsequent chapter would add more layers to the expansive storyline, culminating in book ten, “The Final Conflict” which saw both Nemesis and Torquemada deceased at the culmination of the tale. 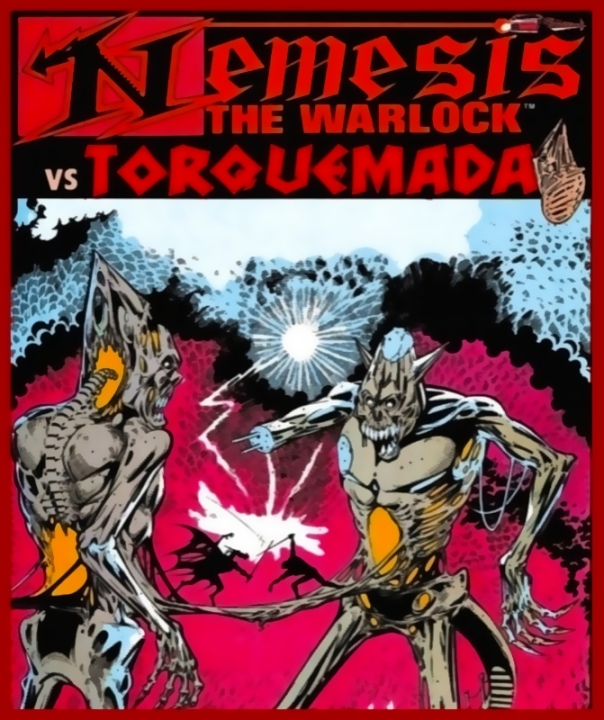 Like all of Pat Mills’ classic creations (Judge Dredd especially) he drew on real world politics and inherent human prejudices. Nemesis spoke on many levels other than the ones accepted in the comic strip at face value. Bigotry, hatred and fascism were all explored in detail, and none of the leads were of great moral fibre, including our hero Nemesis, who is tainted by much the same abhorrence and repugnance as his arch enemy Torquemada, ultimately leaving this dystopian tale exceedingly ambiguous. 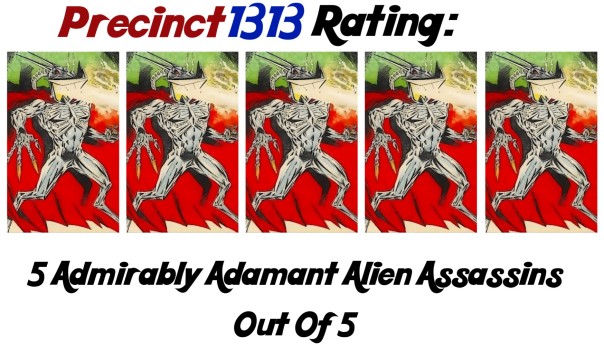 Nemesis the Warlock and all imagery copyright: Rebellion

So who is this Bruce person you ask… that actually is my alter ego, or secret identity if we’re talking Superheroes (and that’s exactly what we do here!!). You probably know me better as ArcaneHalloween, my nom de plume, a bit like Bruce Wayne is to Batman… but nowhere near as cool, obviously!

And here we are, one year in and I am still as dedicated to bringing the world of DC Comics and other assorted things I love to the universe as a whole. I originally started this site as a way to showcase my sketches and stories that I progress with on a daily basis, yet to date I have not featured one piece of my work here. This blog has actually now become devoted to the various fantasy worlds that I revel in on a day to day basis… and Wonder Woman, lots of Wonder Woman.

First and foremost allow me to thank each and every person that has taken the time to read my various musings over this past year, and extra special thanks go to all the amazing people who have clicked that ‘Follow’ button, I am honoured that you have enjoyed my posts enough to want to return on a regular basis. The support I have had from the blogging community here on WordPress has been phenomenal and I look forward to continue interacting with all of you for many aeons to come!

So in celebration of our one year anniversary, we are going to share what have become our most popular posts over the past year.

Some of our more recent followers may not realise that we actually do have a second author that resides here in the Precinct, though time constraints means he cannot create as much content as he would like. He has though written two of the most popular posts for Precinct1313 so far. Ragey (or Pete, in the real world) concentrates his posts mainly on video-games and cosplay, and our first offering from him is; My Cosplay. This has become the second most popular post for the Precinct to date, and in recognition of one year of this website, Ragey will be returning later today with his long awaited follow up to this piece.

Ragey’s next most viewed offering was; Euro Gamer Expo 2014   An extremely entertaining post about the UK’s biggest annual gaming conference (and boy was I jealous of not being there too!).

Though I mainly write about comics, both new and retro, I occasionally also review the odd movie here and there, and by far the most viewed of these reviews so far has been; Solomon Kane  The film is a fantastic representation of the classic character created by novelist, Robert E. Howard in 1928, and is well worth seeking out.

Now this next piece is fairly unique for Precinct1313, in that it’s the only time I wrote a post that was negative. You see, I only write about things I love, there is (let’s be honest) enough negativity in the world without me adding to it, but this particular piece was written just after I discovered that one of my favourite movies of all time (Escape From New York) was being given the “Hollywood remake” treatment, which basically means it’s going to be crap! So in reaction to this I posted; Call Me Snake!  To date the only (fairly minor) rant I have ever actually posted! 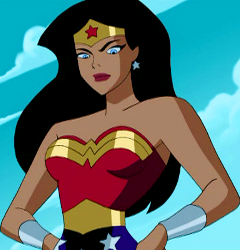 A little over 3 months ago, I started writing what has become, a very popular weekly post called: Classic Wonder Woman. Each week I would choose an outstanding comic from the past, and write a synopsis on the plot and also include some rarer facts about the amazing Amazon, her extended family and the world she lives in. All this is done as part of a weekly countdown to Diana’s 75th anniversary, in December 2016 (so plenty more posts to come!) As previously mentioned, this has become a great source for views each week, with by far the most popular so far being; Classic Wonder Woman: Wonder Woman # 216.

And lastly, the two posts that between them have garnered the most views in the Precinct so far are; Rorschach’s Quote Of The Week  and; The Watchmen: Rorschach  It seems whenever I write anything about the Watchmen’s angry masked vigilante, it gets a ton of views. So more posts about everyone’s favourite Watchman shall be forthcoming!

So thank you once more friends for taking the time to visit, view, and comment on our posts, it is very much appreciated. And please allow me to finish with a slightly revised version of this classic quote from Roman philosopher Cicero, “A world without comic books, is like a body without soul!”

Posted in Other stuff...