The Comic-Book medium has always been seen as a mostly male dominated industry in both characters and creators, this is most likely due to a large percentage of the readership being of the male persuasion, though other more obvious reasons definitely prevail. The Superhero genre, as we know it today, arguably began with Lee Falk’s classic domino masked, amaranthine clad hero – The Phantom, who was followed a mere few years later by DC’s Superman and Batman, it wasn’t until esteemed Professor of psychology – the great William Moulton Marston entered this burgeoning market in 1941 with his iconic creation – Wonder Woman, that the tide began to (very slowly) turn towards a rather more inclusive market.

Of course, attitudes back during the Golden Age of comics were not at all what you would ever call diverse and inclusive, it was very much a male dominated industry and, yes indeed, world. It was Marston that initially fought back against this ideology with his casting of a strong but sensitive character in Diana of Themyscira, a positive female role model that could not only match her male counterparts, but even surpass them. Though Marston is accredited as the sole creator of Wonder Woman (though it should be noted that Harry G. Peter also had an underrated impact on the characters development) it was the women in his life both personal and those of whom he admired, that really had the biggest influence on Wonder Woman’s growth and eventual evolution, most notably – Elizabeth Holloway, Olive Byrne, and suffragist icon – Margaret Sanger.

If you’ve been a follower of Precinct1313 for awhile now you’ll have come to the realisation that not only am I a huge fan of Wonder Woman, but also many other female characters, and creators in not just comic-books but also film and video-games. I love strong female representations in my media, more so than male (sorry Batsy!) I think a lot of this is due to my being almost solely raised by mum from a very young age after my father passed away when I was around nine years old. I also have two sisters (and a brother, it’s ok, I didn’t forget you bro!) who were very independent and forthright, my mother instilled me throughout my formative years with a strong sense of virtue and morality. My mother is and always has been a feminist, she grew up in the 50’s and 60’s when discrimination against women was still very much rife, but actively fought against what was seen as the norm, and I will always be eternally grateful for the values she entrusted me with as I grew.

Now, with that lengthy preamble out of the way, let’s get to what you’re all here for – fantastic female comic-book creators, beginning with… 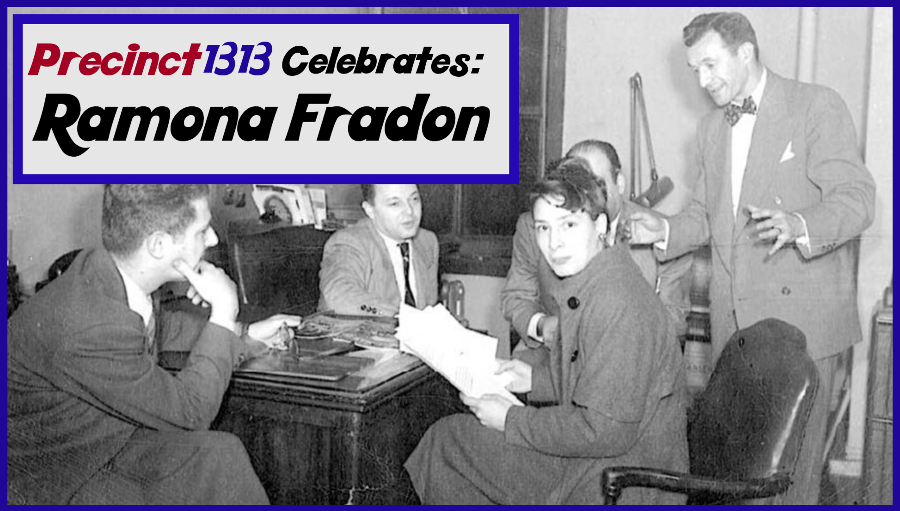 Comic-Book artist supreme – Ramona Fradon first began her paradigmatic foray into the male dominated comic market in the early fifties, and she actually continues to draw and create characters even now, at the amazing age of 94! She landed her first paying assignment with DC Comics, illustrating – Shining Knight, and after that auspicious start, became regular penciller on Adventure Comics and Brave and the Bold, also for DC.

Ramona was born in October of 1942 in Chicago, yet spent most of early life in New York, where she moved with her family at age five. Her father was a commercial letterer and logo designer of which her brother also careered in, as well as her uncle. Her mother unfortunately passed away in 1952, when Ramona was a mere ten years of age, and it was her father that encouraged her to follow her dream and enrol in art school at the Parsons School Of Design located in Greenwich Village. After graduating from Parsons, Ramona met and married her husband, the cartoonist – Dana Fradon, who wholly supported and encouraged her career in cartooning. She pitched samples of her work to family friend, comic-book letterer – George Ward, which is what resulted in her first commission for DC Comics on the aforementioned – Shining Knight.

After praise for her fantastic run on Shining Knight, DC then approached Ramona to continue working for them on a regular basis beginning with Adventure Comics, where she pencilled the back up story of Aquaman, which included her updating the character for the Silver Age, and also co-creating, alongside writer – Robert Bernstein, Aquaman’s trusty sidekick – Aqualad in 1960. She returned to DC to co-create (along with writer Bob Haney) another of their sixties classic creations – Metamorpho for the Brave and the Bold imprint. Ramona admitted to an almost perfect creative synergy with writer Haney, whom both referred to Metamorpho as their literary baby – “It was one of those wonderful collaborations that doesn’t happen very often” Ramona would later say.

From 1965 through to 1972, Ramona briefly left comic-books to raise her young daughter, but returned once again to DC in late ’72 where she would take up the artistic reins on – Plastic Man, Super Friends and Freedom Fighters. She very briefly worked for Marvel, but admitted that structural differences between the two comic-book giants made it so she preferred working for DC, and soon departed Marvel after pencilling one issue of Fantastic Four and an unpublished issue of The Cat. After returning to DC she worked in conjunction with the legendary Joe Orlando, with whom she drew mystery comics. In 1980 she returned to college to study psychology and ancient religion, during this time she took over artistic responsibility on – Brenda Starr: Reporter, after its long term artist – Dale Messick retired.

Ramona continued to draw Brenda Starr for an astonishing fifteen years until her own retirement in 1995. Though, even in retirement she would still accept the occasional pencilling assignment, most notably for Spongebob Comics, plus graphic novels – The Dinosaur That Got Tired Of Being Extinct, and – The Adventures Of Unemployed Man, amongst others. She will be returning to the company that she worked so many years for – DC Comics this year with an absolutely glorious cover for their 80th anniversary of Wonder Woman. Ramona Fradon is the pioneer for female artists in the comic-book format, and was recognised as such by being inducted into the prestigious – Will Eisner Comic-Book Hall Of Fame – in 2006, justly so!