Ten Years Of The Watchmen

“Rorschach’s journal – 2019, ten years ago I starred in one of the greatest cinematic triumphs of all time. In it the streets were extended gutters, and the gutters were full of critics, and when the drains finally scabbed over, the fans looked up and shouted save us… and Zack Snyder whispered “Yes”

A decade ago, the greatest piece of comic book fiction ever wrought was finally released on film by visual auteur Zack Snyder. His triumphant cinematic reworking of the supposedly un-filmable comic series from the eighties was hailed by the fans as a masterpiece of modern dystopian Superhero cinema, but received tepid reviews from critics (Mmmm, now this seems familiar) 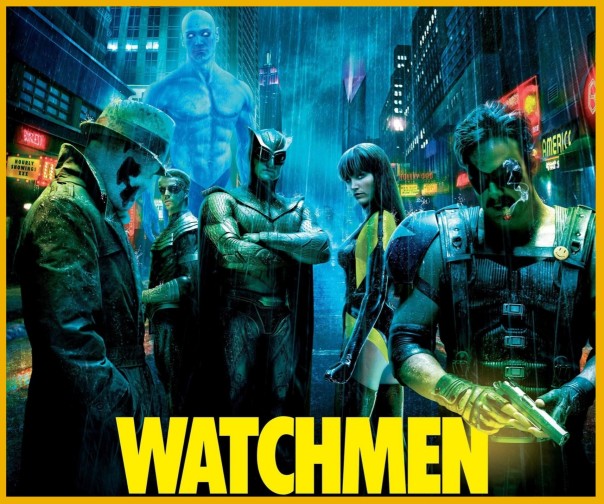 The Watchmen limited comic series was released by DC Comics in 1986, it was a collaborative effort of three superstar British comic book creators, Writer Alan Moore, Artist Dave Gibbons and Artist/Colourist John Higgins. Moore originally posited to DC that he wanted to use their acquired Charlton Comics characters as the basis for the story (Blue Beetle, The Question, amongst others), but DC’s managing editor of the time Dick Giordano, persuaded Moore to create new characters instead, as the usage of DC’s now integrated (into the DC universe) Charlton heroes would have rendered them almost unusable in future timelines because of the direction they would have taken as a result of Moore’s suggested storyline.

Alan Moore is widely regarded as one of the greatest comic book authors of all time, aside from Watchmen, Moore has also introduced us to V for Vendetta, Batman: The Killing Joke and The League Of Extraordinary Gentlemen, but it is Watchmen that propelled Moore to the rank of numero uno in the highly competitive comic book market 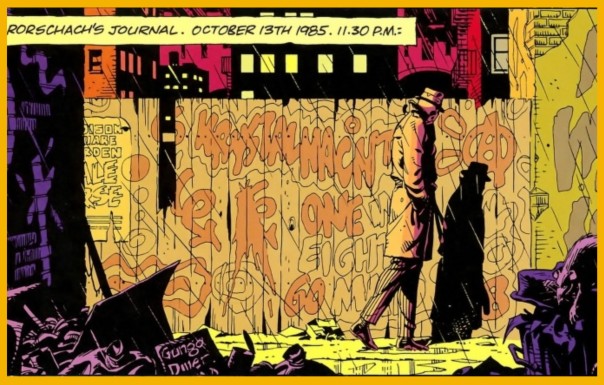 Alan Moore’s writing often takes a dark and dystopian route through pre-existing tropes, subverting and twisting characters to fit into his alternate timelines. Watchmen is a satirical look at superheroes, that reflects the era it was written, be it through the politics of the time (80’s Britain was a particularly political hot-bed) or emerging trends and people’s apprehension of the future.

Watchmen is set in an alternate 1985, and follows masked vigilante Rorschach as he and other retired members of the Superteam – The Crimebusters, investigate the murder of one of their former colleagues – The Comedian. In Moore’s universe, costumed heroes first appeared in the 1940’s, and were a collection of former Police officers and disgruntled citizens who ‘masked up’ to take down an increasing number of criminals who had taken to wearing costumes to disguise themselves from recognition.

In the early eighties with the world on the brink of a nuclear holocaust, and with an outcry by the general populace against masked vigilantes, costumed heroes were outlawed, and most faded into retirement or (in the case of the Comedian and Dr Manhattan) went to work covertly for the Government. Rorschach though continued to fight crime unsanctioned, wanted by the Police he refused to abandon his principles and castigated his former team-mates for their cowardice in the face of the costumed vigilante ban.

After the murder of The Comedian, Rorschach manages to convince former team-mates, Nite-Owl II and Silk Spectre II to come out of retirement and help investigate what he believes is a conspiracy to kill masked heroes. Moore’s take on Superheroes is not for the faint of heart, it is a mature and sometimes shocking take on a popular medium, set in a totalitarian, regressive society consumed with fear and anxiety

Unto this premise comes visual mastermind director Zack Snyder, riding high on his successful conversion of Frank Miller’s “300” graphic novel, he set his sights on DC’s Watchmen, and in 2009 presented us with perfection in comic book to film form. His film mirrored its source material beautifully, condensing the story somewhat, but still supplying every nuance and important depth of plot that the original comic series conveyed.

His choice of actors were astonishingly close to their fictional selves, especially the casting of Jackie Earle-Haley as titular protagonist Rorschach. This film has ultimately become the cornerstone of Zack Snyder’s career, only equalled (in our humble opinion) by his take on DC’s Trinity in Batman v Superman: Dawn Of Justice, which shares many similarities to Watchmen in both tone and visual style.

Ten years on and Watchmen is now more highly regarded amongst its former critics, still loved by the fans and is one of the first ‘R’ rated (18 rated here in the UK) Superhero movies, long before characters like Deadpool were ever conceived for the big screen. Snyder’s film is visually enthralling, deep and concise in its portrayal of the original classic series, as much a must watch now as it ever was, not only one of the greatest comic book movies of all time… but literally one of the greatest movies of all time!

Who Watches The Watchmen?… You Should!

30 Years Ago A Comedian Died In New York…

“Once you realise what a joke everything is, being the Comedian is the only thing that makes sense”

Ah The Comedian, love him or hate him (probably the latter would suit, he’s not exactly a shining bastion of morality) you have to admit he was a larger than life and rather mesmerising personality. And almost exactly thirty years ago he was murdered, some may say his end was justified through his amoral actions, others would argue that he was just a product of his age who did everything he could to keep society from imploding inwards, I personally believe he couldn’t give a damn what anyone thought of him, he did what he wanted and woe betide anyone who disagreed with his actions.

The Comedian was born Edward Blake in 1918, very little is known of his earlier years, more than likely covered up by one of the many covert Government sponsored black-ops teams he worked with over the decades. What is known though is that he began his costumed crime fighting career in 1939 with the moniker The Comedian, though the rather jolly sounding name and frequent smile masked a violent and unpredictable personality, with a love of brutality and mayhem, in fact Hollis Mason, the first Nite-Owl described him as “A particularly vicious and brutal young man.”

For all his negative qualities though, he was a particularly effective crime fighter, feared and respected by his enemies… though mainly feared. He is also one of only two masked adventurers who was a member of both the original Minutemen and The Crimebusters (the other being Captain Metropolis.)

Blake’s actions were often unethical, and at times downright evil, he was in reality no better than the criminals he fought. His violent end is something he foresaw way in advance, in fact some of his last words to his mysterious assailant (read the comics or watch the movie for the answer to that one my friends) were, “Just a matter of time I suppose,” he understood that violent men ultimately succumb to a violent death.

“Justice is coming to all of us no matter what we do. You know, Mankind’s been trying to kill each other off since the beginning of time. Now we finally have the power to finish the job, ain’t nothing gonna matter once those nukes start flying, we’ll all be dust. And Ozymandias here will be the smartest man on the cinder” – The Comedian.

Who Watches The Watchmen? Hopefully We Do!

To an interminably die-hard Watchmen fan like myself, there can be no greater news than the live action return of Alan Moore’s fabled comic characters, and you know what, it’s looking like we are one step closer to seeing just that. Zack Snyder, director of the fantastic 2009 film adaptation of Moore’s groundbreaking graphic novel, has approached studio HBO with the (really rather marvellous) idea of a weekly Watchmen television series.

As to what form the series may take, it’s rather early to predict at this time, but considering we have already been treated to the original 80’s tale, the series would more than likely take inspiration from the 2012 comic prequel series “Before Watchmen.”  These consisted of eight separate mini-series each following one of the main characters from the Watchmen and served as a forerunner to the original Moore series. Of course it could go the other way and create a wholly original story involving our volatile team of heroes, whatever form the show may take however, it is still exciting news. More Rorschach?… oh hell yes!