Written by Grant Morrison, this is definitely his version of the classic 1980’s award winning comic The Watchmen. Set on Earth 4, it tells its story in an intriguing new way (which I won’t spoil here – go read it friends), when the President of the United States is assassinated, heroes Blue Beetle, Captain Atom, The Question, Nightshade and Peacemaker come together to unearth the truth behind the secrets and lies of his assassination.

The Question in full on Rorschach mode

What really cements it as a Watchmen homage are the DC characters chosen to star in this new Multiversity story, The Question is the original template for vigilante Rorschach, Captain Atom was the original Dr Manhattan and Blue Beetle is the character that Nite-Owl was based upon.  Morrison’s love of Alan Moore’s Watchmen shines bright in this comic, a fantastic story in its own right, and a must buy for all fans of The Watchmen.

Pax Americana #1 is written by Grant Morrison, with cover and interior art by Frank Quitely.

The Futures End saga continues through September for DC Comics, with special motion covers for each of the major characters debut issues, as seen above with the awesome Batwoman – Futures End #1.

Futures End is an epic, year long weekly series by Brian Azzarello, Keith Giffen and Dan Jurgens. The series which began in May this year is set five years into the future, and follows Batman Beyond’s Terry McGinnis’ attempt to avert Brother Eye’s nefarious plans on Earth Prime, which is still reeling from the effects of the Multiversity war.

The Multiversity is almost upon us… 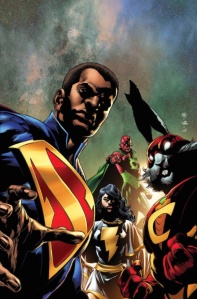 Comic-book superstar writer Grant Morrison will allow us to cross dimensions next month when he re-introduces us to DC’s multiple Earths. Multiversity #1 will take us through the 52 parallel  Earths that make up DC’s Multiverse, during these visits to other worlds we will meet the different variations of Superheroes we know and love including a vampiric Justice League on Earth #43 and the amazing Captain Carrot!

The dimensional defying adventure will take you on journey through six different storylines that take place in their own universes, but are brought together in their fight against an all powerful evil force known as the Gentry. Issue #1 of Multiversity will be available on August 20th, written by Grant Morrison, with art by Joe Prado and Ivan Reis.