You know, we live in a world now so utterly dominated by social media and online critical presence, that nothing is really given a fair shake of the proverbial stick anymore. There used to be a time when the general populace at large would actually, actively make up their own minds on whether they liked or loathed something… by actually experiencing said thing! Now, well they just read and/or parrot what some random critic or stranger on the other end of  this magical digital conveyance known as the internet is spouting. Critics and online meta-data collecting sites such as Rotten Tomatoes and Metacritic are (in my eyes at least) doing a huge disservice to both the the hard work put in by film directors and the film industry itself, critics tend to now have the power of whether a movie succeeds or fails, not through how objectively good or bad it is, but often according to their own set criteria.

(May I just say, right off the bat, that even though I do review both comic-books and occasionally movies, I never, ever review things I have not enjoyed… can’t quite see the point in it, heaping negativity onto something that clearly wasn’t aimed at me but might have given other people pleasure seems, pointless.)

Neil Marshall’s most recent celluloid outing – Hellboy immediately springs to mind as a really rather splendid conversion of it’s original source material (a classic indie comic-series by artist/writer Mike Mignola)but one that is apparently, according to online film critics an uninspired remake of Guillermo Del Toro’s original Hellboy twosome (which admittedly were a fun time, mostly due to Ron Perlman’s presence) They are (in my humble opinion) incorrect, Marshall’s Hellboy take is fantastic, and in a lot of ways better (yep) than Del Toro’s own variant! 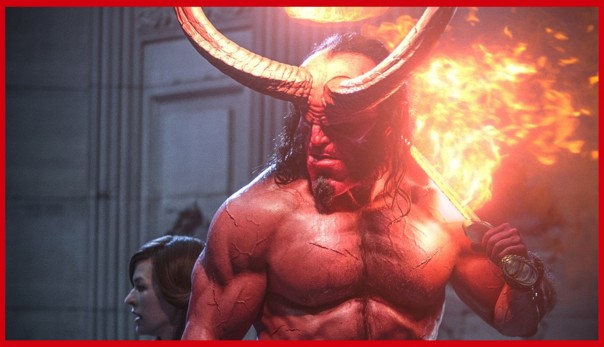 British film director Neil Marshall has given the world such delicious delights as Dog Soldiers, The Descent, Centurion and Doomsday. He has also directed and produced a number of episodes of HBO’s televisual success – Game of Thrones. He is a huge fan of horror, fantasy and comic-books which made him the perfect choice as replacement for Del Toro. Marshall’s Hellboy is a gory, uber violent, and zany take on Mignola’s much beloved character, and a lot closer in tone and style to the original comic creation, with Mignola himself on-board as co-writer.

England 517 AD, and Blood Queen – Nimue (Milla Jovovich) has unleashed a cataclysmic plague upon the populace. Legendary King, Arthur and his faithful magician, Merlin thwart her nefarious plans by severing her limb from limb utilising the mythical blade Excalibur, and secrete her dismembered (yet still very much alive!) body across the British Isles.

Hellboy, Alice and Ben Daimio track down the dreaded and dastardly… Film Critics!!

Back in the present day, Hellboy (David Harbour) is mourning the accidental death of fellow BPRD agent and friend, Esteban Ruiz, who, dispatched to investigate a suspected vampire cult is bitten and himself becomes a creature of the night.  Hellboy accidentally impales Ruiz, who with his dying breath informs Big Red that a prophesied end of days is close. Almost immediately after returning to BPRD headquarters, Hellboy is sent to England by his adopted human father, Trevor Bruttenholm (Ian McShane) to help an arcane Demon hunting group known as The Osiris Club in tracking down and killing three giants who are gleefully on a murderous and hungry rampage across jolly ol’ England. Elsewhere a hog faced faerie named Gruagach seeks the help of witch, Baba Yaga, in seeking out the arcane (de-limbed!) sorceress Nimue and once more unleash a dark plague of epidemic proportion upon the world.

Milla Jovovich’s Nimue Unleashing A Plague Upon… (yep, you guessed it) Critics!!

Marshall’s Hellboy is a fun and fantastic rollick, a hyper stylised, gory, violent romp with one of comicdom’s most entertaining indie characters. As mentioned previously, I thoroughly enjoyed Ron Perlman as the titular character in Del Toro’s original duo of movies, but actor David Harbour (Stranger Things) is a damn fine replacement as Big Red. With a standout back up cast that includes Milla Jovovich hamming it up (in the best possible way) as Blood Queen Nimue, the always reliable Ian McShane as Hellboy’s adopted father and decent performances from Sasha Lane and Daniel Dae Kim… not to mention a surprise appearance from (and yes, I was fanboying hard on this one) one Lobster Johnson, brilliantly brought to life by Thomas Haden Church. Hellboy is silly fun from gory beginning through to overtly violent conclusion, yet throughout has it’s tongue firmly embedded in it’s (red, right) cheek! Recommended. 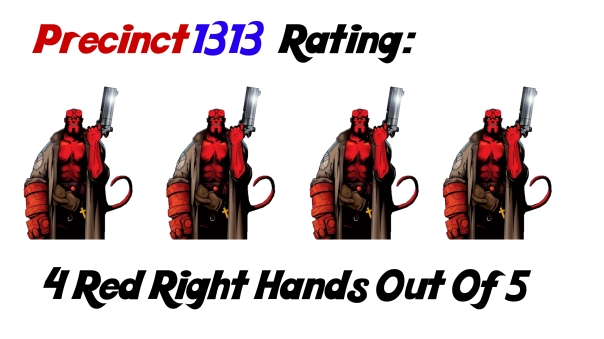