Great Hera! the glorious gods of Olympus once more shine their light on the Themysciran Titan – Wonder Woman, as their halcyon hall of heroes bestows yet another fascinating fable from DC’s Young Adult range of graphic novels. This titanic tome is akin to a previous tale in the younger readers comic-book category, the fantastic “Diana: Princess Of The Amazons” and whilst that particular odyssey was most assuredly stunning and a must read for all ages, Tempest Tossed is on a whole other level of sublime.

Celebrated author Laurie Halse Anderson and illustrator Leila Del Luca provide us with a fresh new take on Diana’s early upbringing as the only child on the paradise island of Themyscira, and it’s ended up being one of my absolute favourite takes on the wondrous one. Beginning with a retake on Diana’s birth, we witness the Five Mothers – Athena, Aphrodite, Demeter, Artemis and Hestia as they weave their old magic to create the immortal female race known as the Amazons, a race of peace loving warriors, sworn to protect the planet. Hidden away from the world on their isle of tranquillity and tasked to one day save humanity when a great evil once more rears its head.

Yet, all is not contentment, revered Amazon queen, Hippolyta yearns for a child and upon hearing her cries of anguish the gods grant her wish, forming an infant from clay, Hippolyta’s dream becomes reality as the five mothers breathe life unto the lifeless form, giving birth to Diana, esteemed Princess, Amazon ambassador, emancipator and superhero, but these are titles yet to be won, as the Diana we follow in this monumental manuscript has just celebrated her sixteenth birthday, a unique concept on Themyscira known as Born Day, amongst a race of immortal adult females the abstraction of atypical birth is mystifying.

Her Amazon sisters have begun referring to Diana as “changeling” watching perplexed as her body goes through the normal changes of all adolescents as they hit puberty, once again a concept not familiar to the sheltered island residents of Themyscira. Mood swings, sudden growth spurts and occasional clumsiness mark her as different to her beloved sisters, Diana wrestles with her feelings of being an outsider, yearning to spread her wings and pondering upon what lies beyond her celestial homeland. All of this she will finally experience on her born day, as refugees wash up on the isle’s illustrious shores having passed through a break in Themyscira’s magical barrier. 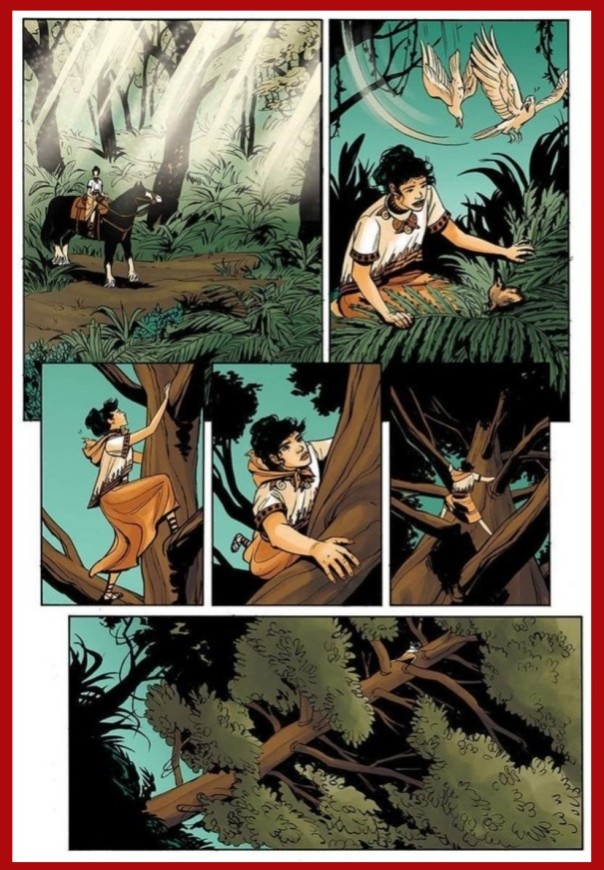 The books opening chapter is comparable to how Diana originally saved Steve Trevor, with her diving fearlessly into a tempestuous and tormented ocean to save the refugees and bring them to safety, yet instead gets swept out to sea passing beyond the mystical shield and seemingly unable to find her way back. Joining the refugees she ends up alongside them in Greece, once there she is detained and placed in a refugee camp. This is her first taste of humanity beyond the shores of her cherished island, and it doesn’t leave a good impression as she witnesses in incredulity the depths of mistreatment, abuse and neglect the refugees suffer on a daily basis.

Railing back at the internment guards and treatment of refugees, Diana comes to the notice of two UN officials, Steve Chang and his husband Trevor (yep, Steve Trevor) as they pluck her from the camp and introduce her to a new life in America, with the promise that Diana can do more to help the downtrodden by securing a formal education and thus later returning to save the refugees, Diana reluctantly agrees. It’s here that we are introduced to the two most influential people in Diana’s new life, Henke, a Polish grandmother and her capricious grand-daughter, Raissa.

Tempest Tossed is a superlative piece of art from Anderson and Del Luca, showcasing their wonderful talents for empathy and enlightenment. Dealing with Diana’s integration into a strange new world, there is a lot of joy, from taking part in a Polka dance off, through discovering a secret parkour group run by Raissa, of which, of course, Diana excels in. The book also delves into the problematic areas of poor neighbourhoods and poverty, with Diana becoming increasingly alarmed at how badly people are treated by their peers and vowing to cease and educate on such practices. Throw in a crooked property developer and the increasing and upsetting dilemma of missing children, it seems adolescent Diana certainly has her work cut out for her.

Wonder Woman: Tempest Tossed is an absolute must read, from the moment I got home from my local comic-book emporium clutching my hallowed copy I was engrossed, a superlative coming of age drama that’s not afraid to delve into the darker sides of humanity but is ultimately a book of family, friends, love and emancipation. One of the very best Wonder Woman tales I have ever read. Highly, highly recommended. 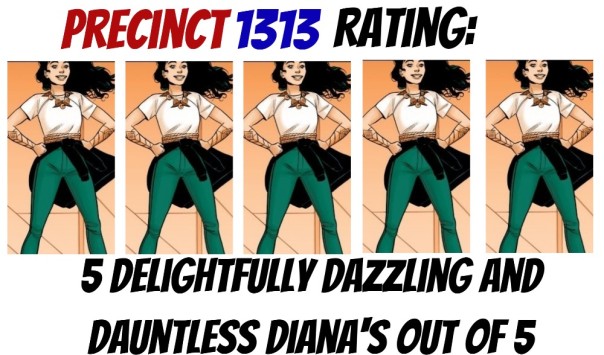