Comic Cover Of The Week: Supergirl #19

Welcome fellow agents of Precinct1313 to another episode of  Comic Cover Of The Week, and an extra special welcome to our continuing “Women’s History Month Spectacular” a bombastic blogging event set up by the tantalisingly talented Cupcakes and Machetes.

Supergirl’s more recent adventures since her DC Rebirth renewal have been rather awe inspiring, as the creative teams have foregone a lot of what constitutes the typical cape and cowl comic book hero tropes, and have been focusing their efforts on Kara’s trials and tribulations as a teenager and alien visitor. The stories have been much more intimate and slow burn than out and out action and conflict, and with the Girl of Steel finding herself back in mainstream public consciousness thanks mainly to the amazing CW television series, Superman’s Kryptonian cousin is soaring higher than she ever has.

Diversity has been at the forefront of Kara’s comic book adventures, with DC Comics evolving along with the world around them to spotlight and champion characters from across a much broader spectrum of gender, race, and ethnic heterogeneity.

In fact Supergirl #19 steers itself away from the principal narrative of Kara Zor-El and focuses its attention on Lee Serrano, a brand new non-binary character who is struggling with their emerging identity crisis, bullying from their student peers, and an increasing anxiety about revealing their gender quandary to their parents, this topical storyline is deftly handled by writer Steve Orlando with an extremely sensitive and compassionate take. Lee is initially presented as androgynous up until the point of their coming out in two sequences, once with Supergirl and secondly to Lee’s parents. It’s an emotional and fantastically wrought piece by the book’s creators and is a heartfelt tale that sits perfectly with what we have come to expect from the ongoing Supergirl monthly comic series.

‘In his search to write a CatCo piece on the truth about Supergirl, Ben Rubel interviews a young kid named Lee Serrano, who recently became close friends with the Girl of Steel. As Lee struggles with their parents and school bullies for acceptance as non-binary, Supergirl is caught between punching her way through the problem, and standing behind Lee as a symbol of hope’

Supergirl #19 is available right now. This stunning variant cover by Stanley “Artgerm” Lau is sure to be in short supply, so why not don your cape and red boots and super speed your way over to your nearest comic book emporium, before it disappears into the phantom zone forever… 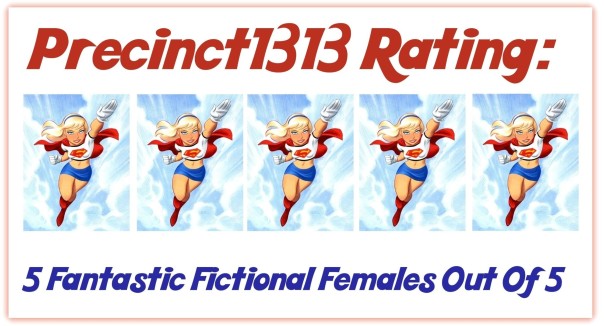 Let’s be honest, origin tales have been spectacularly overused in both the comic-book scene and their spin off movie counterparts. How many times do we really need to witness Spiderman being bitten by a radioactive wall crawler, or Batman losing his parents to the gun barrel of Joe Chill… these characters are now so iconic that virtually everyone, comic book fan or not, is overtly familiar with their raison d’etre.

With all that said, you may be feeling slightly bemused that I’m recommending a series that dynamically delves into the past of Superman’s cousin, Kara Zor-El, but there is a very good reason behind that… this series is fantastic. As a matter of fact it’s not only one of the greatest Supergirl comics to have ever been released, but one of the greatest comic-book series ever published… period! 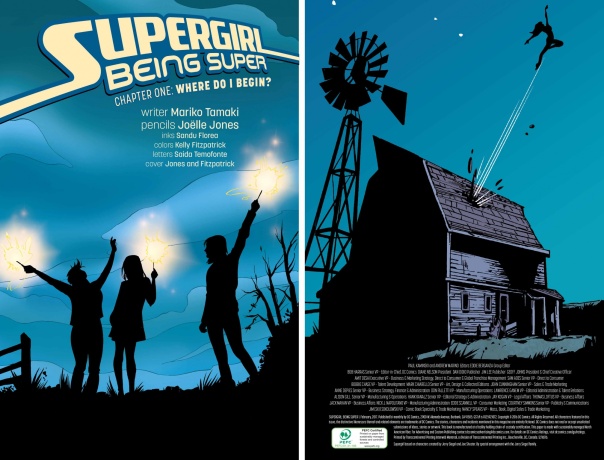 Kara has recently found herself back in mainstream public consciousness thanks mainly to the extremely successful (and brilliant) CW television show, and with the really rather rousing Steve Orlando “Supergirl Rebirth” comic book run, Superman’s Kryptonian cousin is finally receiving the attention she deserves.

Which brings us to Kara’s most recent triumph, the astonishingly awesome “Supergirl:Being Super” the Mariko Tamaki penned opus that transcends previous Kara Danvers origins by offering us a fresh take that focuses more upon her relationships, trials and tribulations of everyday life as a teenager growing up in a small american town. It’s definitely a slower burn as a comic book, less super heroics but more angst, sass and quirky dialogue as we follow Kara in an exceptionally engaging and fantastically well written coming of age story.

If you approach this series with atypical expectations of explosions, super speed and heat vision, you’re going to go away disappointed, this is a tale that spotlights the character behind the iconic “S” symbol and it’s all the better for it. Supergirl: Being Super is a revelation in Superhero storytelling, and probably the greatest iteration of the classic character to date. Highly recommended. 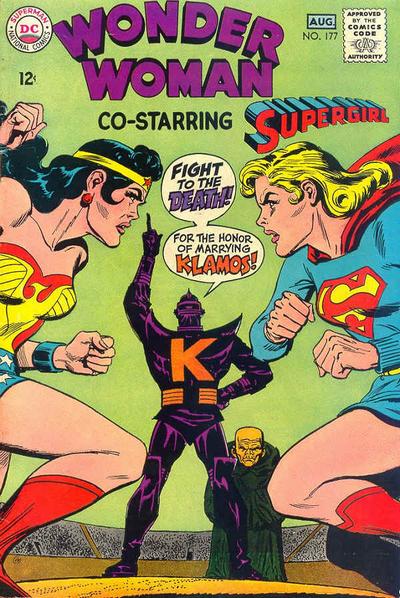 Welcome back friends to another instalment of Classic Wonder Woman, Precinct1313’s weekly comic-cover countdown to the 75th anniversary of everyone’s favourite Amazonian superhero. This week we present you with: Wonder Woman #177, released in 1968, written by Bill Finger, with cover art by Irv Novick and interior art by Win Mortimer and Jack Abel. 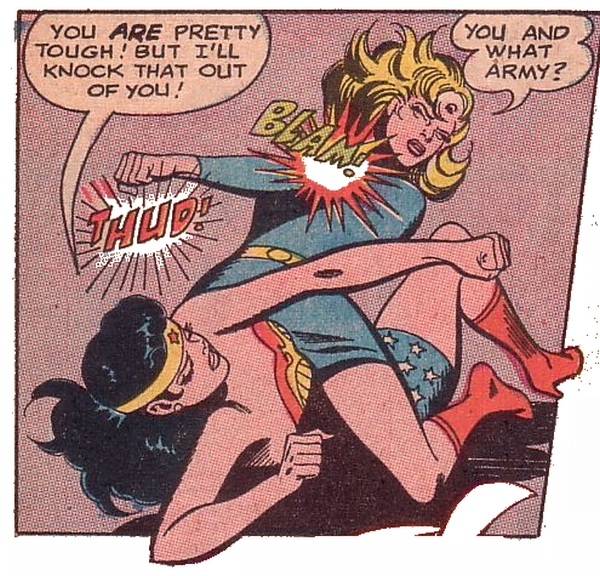 This classic issue contains a titanic clash between Diana and Kara Zor-El, better known to most people as Supergirl, in a story entitled, Wonder Woman & Supergirl versus the planetary conqueror. The above image of the colossal struggle between Diana and Kara is one of the few pieces that show Wonder Woman without her iconic bullet deflecting bracelets (which are removed pre-fight).

The Bracelets of Submission, to give them their true name are worn by the Amazons as a reminder of the years that they were subjugated by demi-god Hercules. Centuries after gaining their independence, they continue to wear the bracelets as a symbol of their past oppression. Diana’s bracelets were originally formed from the legendary, Shield of Aegis.

The inspiration for the creation of the bracelets originated with Diana’s creator, William Moulton Marston, who based them on the bracelets that his lover Olive Byrne would frequently wear.

Join us again in a weeks time for another classic WW cover, my admirable amazonian associates! 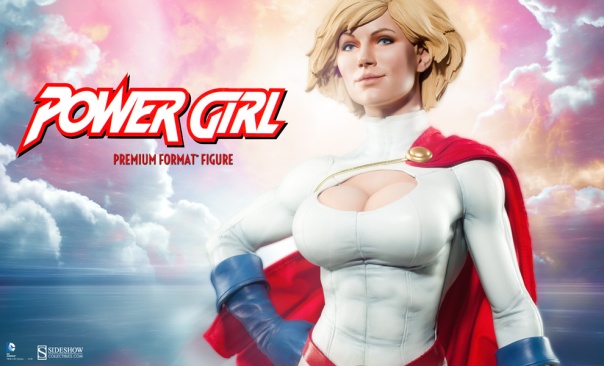 Well this is awesome, Sideshow Collectibles once again show their superior sculpting skills with this amazingly lifelike statue of Kryptonian – Power Girl, aka  Kara Zor-EL. Kara hails from the alternate dimension of Earth 2, where she is known as Supergirl, after being stranded on Earth One with her best friend and fellow Superhero The Huntress, she changed her name to Power Girl/Karen Starr to differentiate herself from Earth One’s resident Supergirl. Cousin to Superman with the same powers, PG is one of DC Comic’s most enduring and beloved characters. 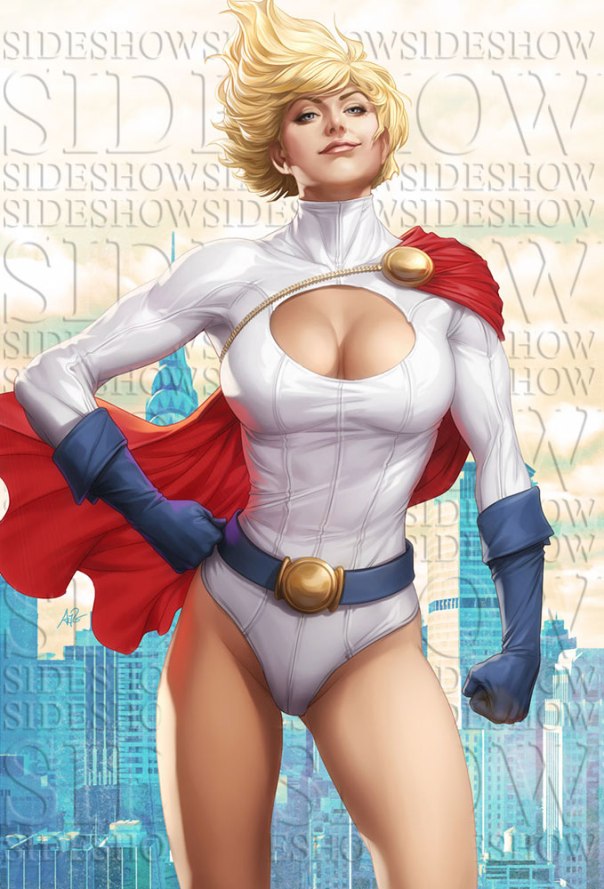 Sideshow’s premium format statue follows hot on the heels of last month’s Wonder Woman statue and is equally as gorgeous. Designed by the extremely talented Stanley Lau, this amazingly detailed statue stands at an impressive 21 inches in height. 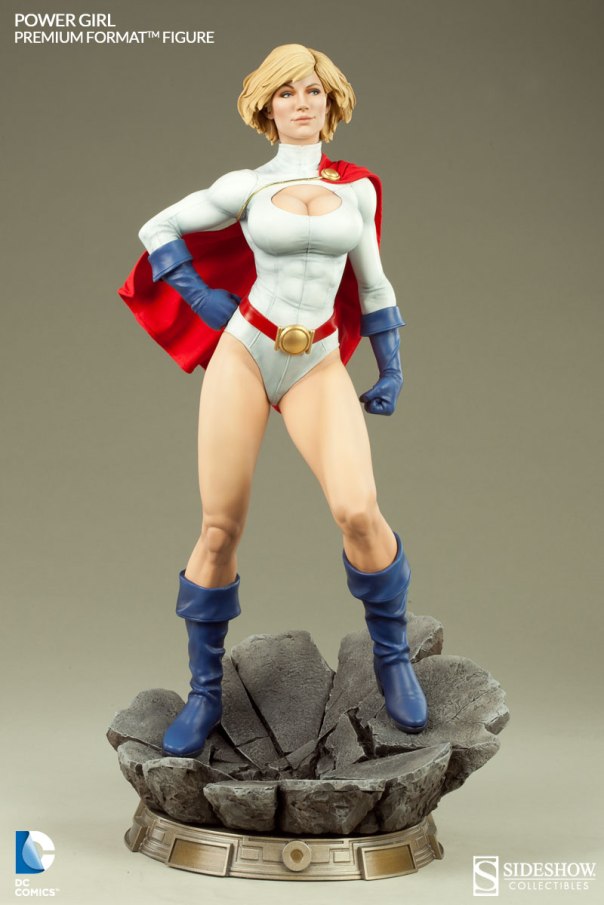 Sculpted in polystone by the very talented team of Andy Bergholtz, Mark Newman, Earl Ellis and Joe Menna, with the meticulous paintwork by Kat Sapene and Mireya Romo-Bowen. Sideshow are the kings of statue makers, Power Girl is limited 3000 statues worldwide and is also available in an even more exclusive limited variant edition with an interchangeable head.

We are huge fans of Power Girl here at the Precinct, you may recognise her as our header image for the website, so it goes without saying that we will probably have to get this at some point (as soon as our wallets recover from the expense of the Sideshow collectibles Wonder Woman purchase) Sideshow pre-orders begin November 13th, so if you like the look of this stunning statue head on over to their site PG fans. 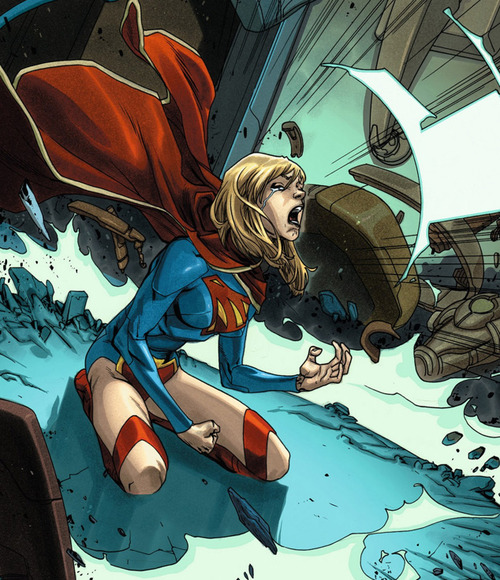 It looks like we will be getting yet another classic Superhero gracing our TV screens real soon, this time everyone’s favourite girl of steel – Supergirl. Warner Brothers are currently working on an adaptation of the character, and fan favourite comic author Geoff Johns is rumoured to be onboard. Supergirl, real name Kara Zor-El was created by Otto Binder and Al Plastino in 1958 as a female counterpart to Superman, she is his cousin and one of the few survivors of the destruction of their home planet of Krypton. 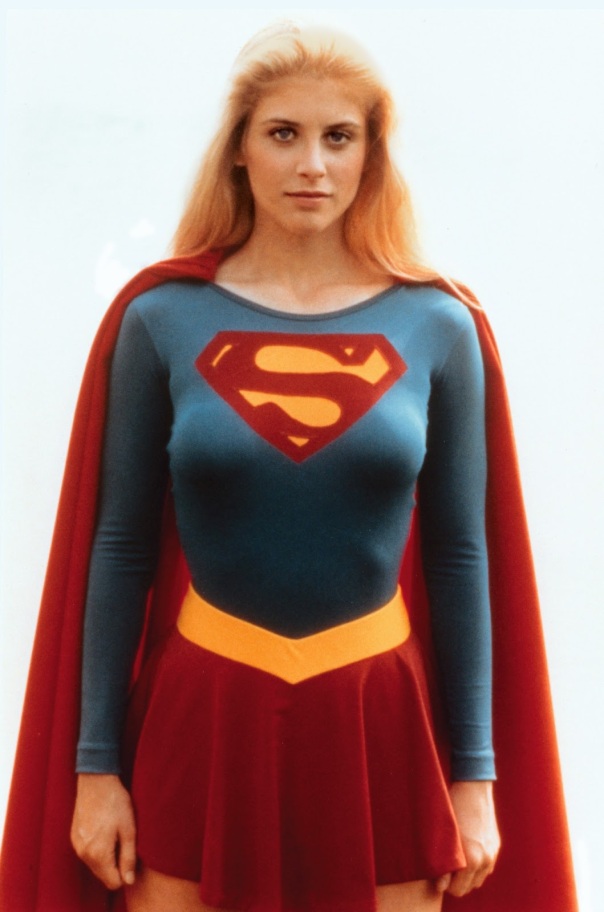 This of course isn’t the first time Clark Kent’s Kryptonian cousin has appeared in film and television, she was portrayed in the 1984 move ‘Supergirl’ by actress Helen Slater, a much maligned movie that yes is rather cheesy, but is also a whole lot of fun…plus it’s one of the very few Superhero movies that has a female Superhero as its star, and Helen was great in the role, looking very much like the comic character herself.

In 2007, actress Laura Vandervoort portrayed the girl of steel in the television series Smallville, and continued to play the character for the rest of the series, we have always thought that the actress bore a striking resemblance to comic artist Michael Turner’s amazing rendition of Supergirl. With Superhero TV series’ getting popular with shows like Arrow, the Flash and Gotham, it’s about time we see more female comic characters on screen, and Supergirl is the perfect choice to lead the way!