Welcome once more, oh peerless Precinct purveyors of phenomenal paintings in print, to our continuous countdown of cool comic cover collectables. In our earlier exciting episode we introduced you to the stunning skills of the superlative Stanley Lau and his titanic take on Wonder Woman.  This efficacious episode we shall be shining our trusty Bat-signal on the astonishing artistic aesthetics of Alex Ross, and his perfectly pencilled panoramic take on – Justice Society Of America #26. 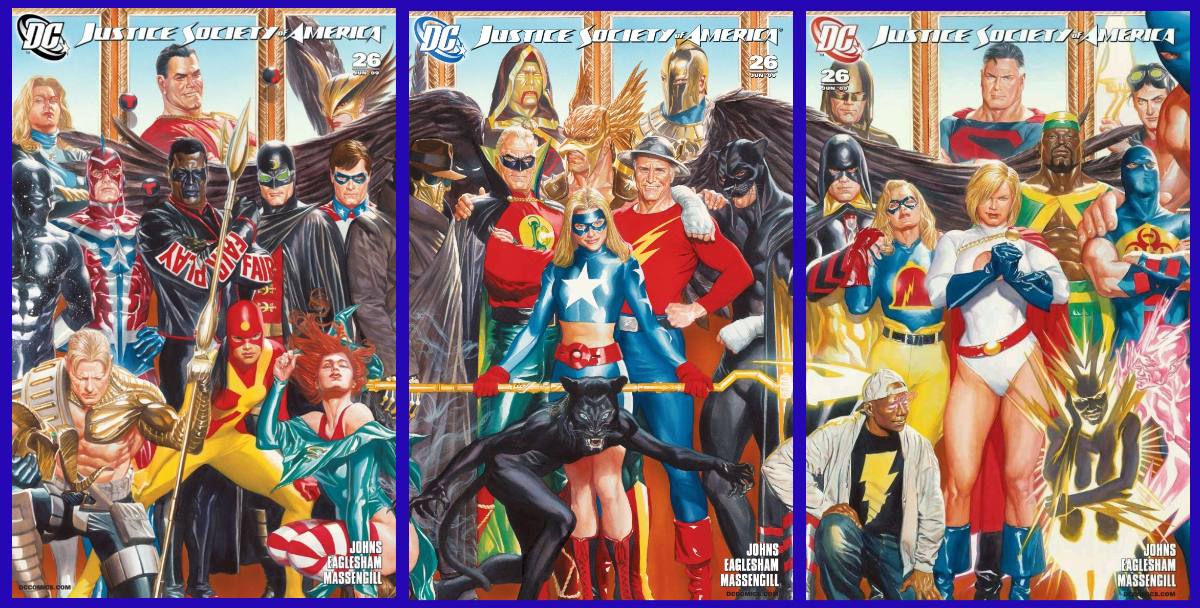 Though this is technically three covers, each of these magnificent masterpieces interlock to regale the reader with Alex’s peerless painterly realism, bringing these otherworldly beings a sense of verisimilitude like no other artist before.

Nelson Alex Ross was born in Portland, Oregon in January 1970, though he was raised throughout his formative years in Texas by his minister father and mother who was a successful commercial artist, from whom her received his initial inspiration and love of the arts. Alex has always attested that the biggest impacts for his unique comic art style were John Romita, George Perez and Neal Adams, whose techniques he attempted to imitate when he started drawing on a more serious level in his teens.

Alongside these maestros of comic-book art, Alex also had an attachment and love for the realistic stylings of Norman Rockwell, with his work often cited as being a cross between both Perez and Rockwell, giving us an almost unmatched hyper realistic form of absolute extraordinary comic art. His first comic-book after graduating from the American Academy of Art in Chicago was for Now Comics’  Terminator: Burning Earth, a five issue mini-series released in 1990. In 1996, Alex teamed up with writer Mark Waid for the DC series – Kingdom Come, Alex’s work on this seminal series was a massive hit with fans and critics alike propelling him into an almost overnight sensation. Alex continues to work in the comic industry today, with his adroit artistic style in huge demand amongst the biggest publishers in the field including DC Comics, Image, Dynamite, and Marvel.

Why Not Join Us Again, Oh Fellow Fans Of Fantastic Fiction, For Our Continuing Countdown Of Cool And Crazy Comic Cover Collectables!