That’s right Batfans, today charts a crucial chapter in everyone’s life… Batman Day! Join DC Comics and millions of fans worldwide in celebrating the world’s most popular and significant cowled crimefighter. From the printed page through cinematic excursions and video game adaptations, toys, collectables and onward, the dark and surly one has been a major part of many peoples lives for eight exquisite decades.

I remember reading the issue a dozen times over in one sitting and was eager to divert more of my attention to this amazing hitherto unseen world that contained fantastical characters who really captured my young burgeoning imagination in a way nothing else previously had, I have been fanatical of the Dark Knight since that time.

Detective Comics #466 marked my initial encounter with the masked manhunter, and told the tale of Batman’s clash with villain Signalman, not exactly an iconic member of Batman’s notorious rogues gallery it has to be said, but it was my very first brush with a Supervillain. This wonderfully nostalgic comic issue also introduced me to the fact that Batman shared a universe with other Superheroes, thanks to a very enjoyable back up story, that regaled the young me with the daring adventures of the Emerald Archer – Green Arrow.

So, a very happy Batman Day to you, my bodacious Bat brethren, and why not sound off in the comments below about your very first encounter with the Dark Knight, and what you will be doing to celebrate another year in the company of Gotham’s greatest grim and gritty guardian angel.

The Batman of the 1960’s wasn’t a Dark Knight, he wasn’t foreboding or scary, and seemed to have gotten over, fairly easily, the murder of his parents that had haunted him and made him a creature of the night… in fact the Batman of the sixties wasn’t even a denizen of the dark, preferring to run around his native Gotham, during daylight, in tights!

Yes indeedy Batfans, 60’s Batman and today’s modern version are literally day and night, but both are still Superheroes of the highest echelon and downright entertaining, whether it’s the Caped Crusader holding aloft a comical round bomb whilst darting around avoiding nuns and ducklings (!?) or the Dark Knight stalking his prey from the shadows and vigorously snapping limbs…

Light and Dark, two sides of the same coin… (Harvey Dent would be proud)

And now, the stars of the 1966 epic televisual series, Adam West (Batman), Burt Ward (Robin) and Julie Newmar (Catwoman) are reuniting to Biff! and Pow! their way into a brand new animated movie!  The actors will reprise their iconic characters when Warner Bros release the new movie, Batman: Return Of The Caped Crusaders on Digital HD on October 11, and then on Blu-Ray on November 1. Watch the exclusive movie clip below fellow Batfans and look for a review of the film itself in November, Same Bat-time, Same Bat-channel. 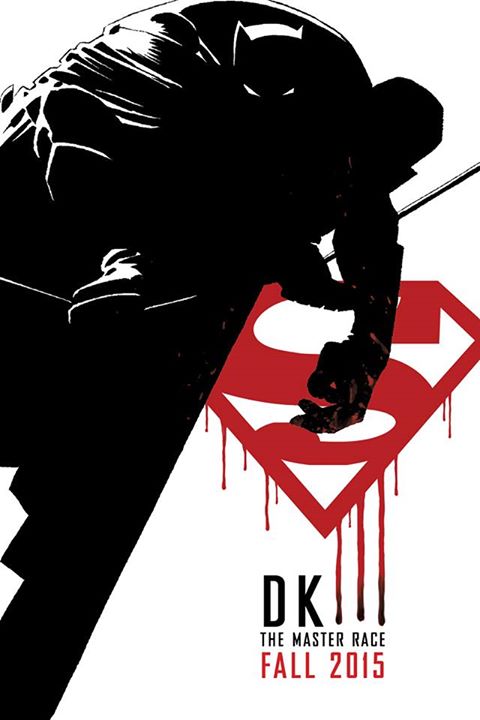 That’s right Bat-fans, Frank Miller, the celebrated writer and artist of the 80’s classic Dark Knight Returns, is himself returning, to the franchise that made him a legendary name in the comic book world. Frank Miller’s epic 80’s mini-series changed the way the world now perceives Batman, Miller’s Batman is the dark and broody character we have now, a Dark Knight as opposed to the 70’s and early 80’s Caped Crusader.

The original Dark Knight Returns is one of the most celebrated comic book stories of all time, sitting comfortably alongside other luminary greats like Watchmen and V for Vendetta. Its 2001 sequel, The Dark Knight Strikes Again, isn’t as highly regarded but is still a fun ride, just nowhere near the revolutionary brilliance of the original. Dark Knight 3: The Master Race will be released in Autumn this year, marking the original series’ 30th anniversary.

That’s right friends, today is officially Batman day, 75 years of the Caped Crusader saving Gotham and bringing millions of fans worldwide great comics, animated series and movies. We love the Batman and shall be celebrating his 75th by watching some fantastic films. Our choice for the evening are Dark Knight Returns animated and Batman Returns with the amazing Michael Keaton and Michelle Pfeiffer. So how are you marking this occasion…what movies are you watching?, feel free to let us know in the comments and have a Bat-tastic day all you Bat-fans!