The pairing of two of fictions most legendary and popular warriors seems like a fantastic idea, throw into the mix superstar writer Gail Simone and equally talented artist Aaron Lopresti and you most certainly have a match made in Olympus, or in the case of this tantalisingly titanic tale – Hyboria.

A decade before our favourite Themysciran Princess first debuted unto the World stage, a Cimmerian, black haired and sullen eyed, sword in hand and ready to tread the jewelled thrones of the Earth under his sandalled feet first appeared, his name was Conan – thief, warrior, reaver and slayer. Robert E. Howard’s cult character became a huge hit and has spawned myriad novels, comics and movie adaptations since his first appearance in December 1932. This virtually superhuman barbarian has crushed all who have stood before his powerful presence, man and beast has befallen his blade, but has he finally met his match in the form of Zeus’ favoured champion – Wonder Woman?

Gail Simone And Aaron Lopresti’s Run On Wonder Woman Is As Legendary As The Character Herself!

And since we’re talking legendary pairings, how about the venerable pairing of acclaimed scribe Gail Simone and prestigious penciller Aaron Lopresti, coming together once more to bestow upon us, humble comic fans, another glorious interpretation of the Themysciran Titan. Their previous collaboration on Wonder Woman a few years back was literally one of the greatest runs in comic-book history, and lo, once more their particular brand of magic artistry brings forth yet another astonishingly epic saga.

Now, at first glance the idea of teaming up Wonder Woman – the poster child of female liberation and emancipation, a shining emblem for feminism with a character in whose reality treated women often in the tired damsel in distress trope may seem like an odd pairing, but it’s for these exact reasons that this comic works so well, like popular heroine Red Sonja before her, Diana is able to turn the tables on the barbaric Cimmerian to prove that, not only can she match him in strength and fortitude, but ably surpass him.

Simone’s deliberate slow build up in the story allows us to richly immerse ourselves in Conan’s world, she is the Queen of immersion and deftly drags the readers into his cold and savagely tempestuous reality. Alongside Gail’s impressive writing talents stands Aaron’s always astonishing artwork, these two creators compliment each others work like no other, and Aaron’s pencilling is some of the best I’ve seen in comics for years.

“What makes one a legend? How do legends carve their name into history when countless others are forgotten? Wonder Woman and Conan the Barbarian are destined by the fates to be legendary, but when their stories collide, will both emerge victorious or will the fickle Gods cut their lives short? 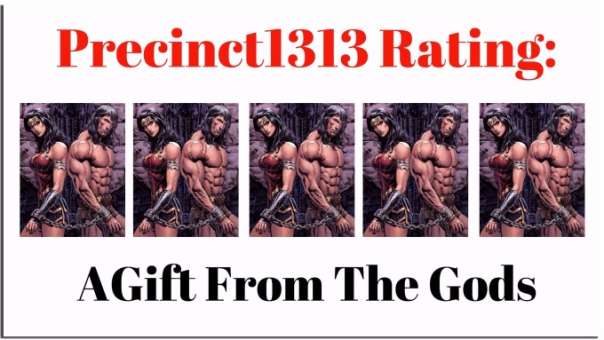 The collected version of Wondy/Conan is available in both soft and hardcover variants from your local comic-book emporium.