Professor Marston And The Wonder Women: How Not To Film A Biopic!

Now, as you probably know we don’t often address negatives in the Precinct, it is a place that all its agent alumni come together to celebrate the phenomenal publishing powerhouse that’s known as DC Comics… but this… this is too much.

Following closely in the stead of the absolutely sterling Wonder Woman cinematic triumph comes Professor Marston And The Wonder Women, a so called biopic of the true story behind Diana of Themyscira’s creator… except it’s not… at all. 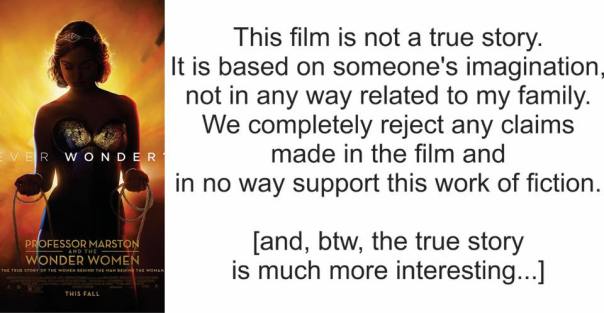 Though the biopic has received above average reviews, its actual content is in no way, shape, or form true, which ultimately negates its claim to being a biopic and ends up as much an act of fiction as the comic-book character herself. Christy Marston, the granddaughter of William Moulton Marston recently made several statements that the film did not represent almost any fact of truth whatsoever and was needlessly sexualised to add a touch of salaciouness, especially in its depiction of the two women in Marston’s life who did not share polyamorous relations.

In a recent interview Christy Marston said that the family had not been approached at all by the film makers – “No, there was no contact” Christy revealed “In an interview Angela Robinson (the director) said she made the choice not to talk to anybody because she wanted to use her own interpretation, both the depiction of the Marston family and Wonder Woman’s origins are entirely made up”

Two other Wonder Women have recently also spoke out on the film, Lynda Carter who played the iconic character in the 70’s and 80’s tweeted that – “As a friend of the Marston family, I encourage you to listen to Christie’s opinion about the movie” and Susan Eisenberg who for many years was the voice talent behind the Themysciran Titan in various DC animated series and movies said – “Important to note, the Professor Marston film is NOT a true story but a narrative made up by the filmmaker!”

Now then, I have been a WW fan since I was nine years old, and like most things I love in life also had a fascination with the characters origins both in an out of its fictional setting especially that of her talented creator William Moulton Marston, and this is no way to honour his name and family.

I was excited when I first heard the inkling of a movie based upon the Marston family, but having followed Christy Marston on Facebook and Twitter for many years became dismayed the more I heard about the project. I will leave the link for Christy’s interview with Big Fan Boy, the popular movie site that goes in depth on the subject right here  please read if you get the chance and Christy’s Facebook page is a must follow for any fan of Diana Prince and is attached thus – Share The Wonder it is a fascinating place full of dedicated WW fans, with Christy herself a guiding light throughout.

The character of Wonder Woman not only stands for hope, love and compassion but also truth, I’m sure she’s really rather peeved right now!