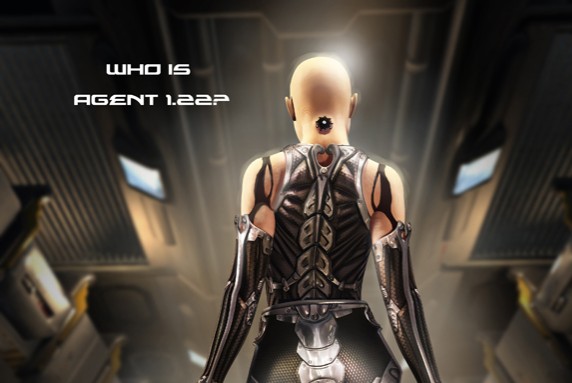 I’ll be honest, I’m not really that into sci-fi, I have always preferred Superheroes and fantasy to spaceships and lasers. There have been exceptions to this rule of course, Ridley Scott’s Alien, John Carpenter’s The Thing, Paul Anderson’s Event Horizon, and now Agent 1.22 has joined that illustrious list.

Cyborg operative Agent 1.22 is an emissary of T.E.R.R.A (Technologically Advanced Regimented Reconnaissance Agent) cryogenically preserved in deep sleep between assignments. When external communication is lost with Fortress DX-B Biotech Facility, Agent 1.22‘s Mother-Ship – S.S.MNEMOSYNE proceeds to the third moon of Pandora-5 to discover the fate of the facility and its staff.

Biotech Facility DX-B has recently been host to a team of scientists working on developing a vaccine for the insidious Tempest Virus that has been devastating the outer colonies. The last transmission received from the facility was 91 days previous and the data indicated that the mission was close to success. With the facility in lockdown and communications unresponsive, Agent 1.22 must infiltrate the biotech labs and ascertain what has happened.

Gorgeous visuals draw you in…

Visually beautiful, this first issue has an almost movie like ambience that propels the reader into the storyline, creating a compelling atmosphere. The story hits all the right notes; suspense, intrigue, action and even though our hero is a silent protagonist, we find ourselves becoming emotionally attached to her through the monologues of her A.I. space cruiser Mnemosyne, which is not only her conveyance through space but also a surrogate mother, who is slowly assimilating the concept of human parenting in order to keep Agent 1.22 safe and fully prepared for any danger or unexpected outcome. 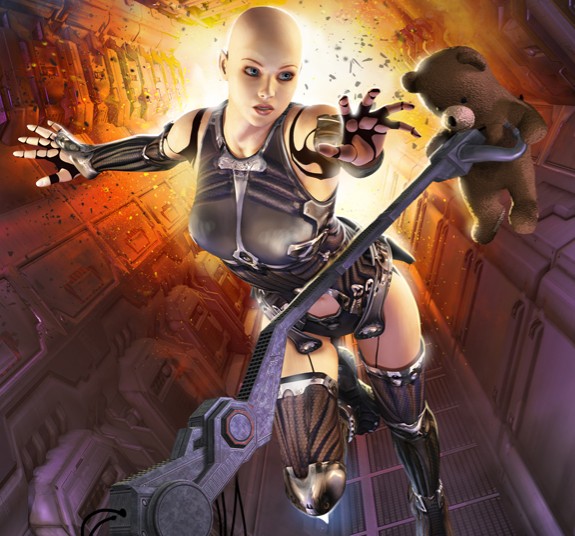 When two of Agent 1.22‘s creators, Angelo Panetta and Tom Dheere contacted me recently and asked if I would be interested in not only reviewing Issue #0 pre-release but also exclusively writing a synopsis for their website and Kindle profile, I absolutely jumped at the chance. I had been following the project for quite sometime at that point, and was intrigued initially by the awesome art-style and then drawn in by the slowly revealing story arc. As I mentioned at the start of this piece, I am not really much of a fan of Sci-Fi overall, but I am a fan of great fiction and this is exactly that… a visually resplendent, deep and captivating space thriller, replete with an absorbing mythos and engaging characters.

Agent 1.22 and the above images are copyright: DPM Publishing.

Now it’s not often that I leave my comfort zone and review comics outside the realm known as DC Comics. In fact it’s so rare that you have more likelihood of being doused by chemicals that were struck by lightning, gaining super-speed and wearing a scarlet coloured outfit than reading a review that isn’t immersed in DC lore. So when a comic comes along that piques my interest enough that I forego my chosen champion of comic publishers for awhile, you know it has to be good… and Agent 1.22 really is something special.

I have been avidly following this project for some time now, through their website, facebook page and blog, I have also been lucky enough to have had contact with one of the creators, Tom Dheere, who very graciously sent me a link to the preview of Issue #0 and also gave permission to use the fantastic pieces of art you will see dotted throughout this post.

Agent 1.22 is a cyborg operative of T.E.R.R.A (Technologically Advanced Regimented Reconaissance Agent), Before each and every mission she is thawed out from cryogenic deep sleep and her next mission is downloaded into her brain. Her current task is to find a cure for the insidious Tempest virus that is devastating the outer colonies. Each and every time she completes a mission she is debriefed and mind-wiped before being frozen once more. Who is Agent 1.22? How did she become a cyborg? Will she be able to stop the Tempest virus before it reaches Earth?

Agent 1.22 originally started life as a 2007 web-series, the comic series itself will be the foundation blocks of the franchise, with issue #0 a segue way into the initial four issue mini-series.

Written by Stephan Wilson, who has worked for IDW, DC and Marvel comics as well as the BBC, WB and NBC. Creator and writer of the best selling graphic novels “The Pound” for IDW.

Illustrated by Douglas Shuler, a sci-fi and fantasy artist who has been involved in the medium for over twenty years. Douglas has worked with such luminary companies as Paramount Pictures, Lucasfilm and Wizards Of The Coast.

Introduce yourself to Agent 1.22 by downloading the free preview of issue #0 right here, this extremely promising new series will be released digitally and in physical form in October.

Head on over and show your support to this new franchise, and help Agent 1.22 unravel the mystery of her past and the devastating Tempest virus.