Yes indeed fellow Batfans, the classic 1960’s Batman live action TV series reached a significant milestone today, a monumental 50 years since it first aired on January 12 1966. The camp comedic series starred Adam West as the Caped Crusader and Burt Ward as the ever faithful Boy Wonder, and successfully introduced to a whole new generation, the continuing adventures of Gotham’s favourite guardians. Aired twice weekly by ABC, the show lasted just three seasons, but has gone on to be one of the most fondly remembered television series of all time, and is one of the original catalysts for the popularity of Superhero shows as they stand today. 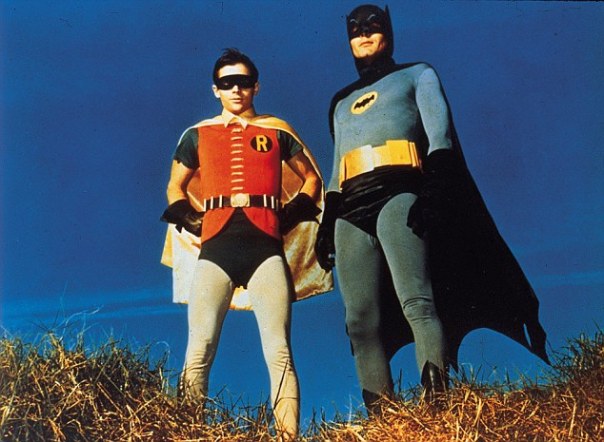 The series followed the adventures of the Dynamic Duo as they attempted to thwart the plans of the various gaudily costumed Super-villains, who would easily bypass the inept Gotham Police force and set up ridiculous traps to ambush our fearless crime-fighters. The show was intentionally tongue in cheek, and would often champion simplistic moral messages such as the usage of seat belts or the importance of eating your greens. Each episode was narrated by producer William Dozier, who would utter the immortal line – “Tune in tomorrow, same Bat-time, same Bat-channel,” at every cliffhanger ending.

Special mentions must go to the fight sequences, that incorporated comic book style word balloons containing descriptions of the sounds of punches and kicks connecting, and of course, the amazing opening theme tune composed by Neal Hefti.

Happy 50th to the Dynamic Duo!

Actress Yvonne Craig best known for her role as feisty costumed crimefighter Batgirl, sadly passed away on Monday after a two year battle against breast cancer. Yvonne was the pioneer of the on-screen female Superhero, many years before Lynda Carter’s portrayal of Wonder Woman or Michelle Pfeiffer’s Catwoman. Yvonne was a professional ballet dancer and was known for performing her own stunts when she joined the 1960’s Batman TV series in its third season.

Working alongside Adam West and Burt Ward, Yvonne said that it was a “Wonderful experience, everyone on that show got on so well, which does not happen often, it was a joy to go to work everyday.” In an interview with Femme Fatale magazine the actress said “I meet women who say that Batgirl was their role model, because it was the first time they really felt that girls could do the same things guys could, and sometimes even better.” She retired from acting in the late seventies, but was an active campaigner throughout her life for equal rights and pay for women. Our thoughts and condolences go out to her family and friends.