We Can ‘Harley’ Believe It’s Been 25 Years Since Ms Quinn’s First Appearance!

That’s right, it’s been a quarter of a century since the mischievous minx of mayhem was first unleashed onto an unsuspecting comic book universe, much to the chagrin of most Superheroes, but conversely to the delight of millions of comic book fans, for Harley truly is… one of the greatest characters ever conceived, and if you don’t agree, then The Joker would like to have a word with you!

Former psychiatrist, Dr Harleen Quinzel was originally an Arkham Asylum intern who, after prolonged psychology sessions with crazed clown The Joker, was coerced into thinking that Batman was the ultimate cause of Joker’s insanely murderous high jinks. Slowly falling in love with the irascible psychotic, Harleen eventually aided the mirthful murderer to escape the asylum and joined him on his insane crusade to dispense madness and murder on the populace of Gotham City.

Ms Quinn was created by Paul Dini and Bruce Timm and actually made her first ever appearance outside of the comic book format, on the critically acclaimed Batman: The Animated Series, in an episode titled “Joker’s Favour”. Actress Arleen Sorkin was Paul Dini’s original inspiration for the clown princess of crime, after he saw her in an episode of Days Of Our Lives, in which she appeared in a dream sequence wearing a Jester outfit. Dini and Sorkin had been friends since college, and he even incorporated certain facets of her personality into the character.

Though initially brought in as a throw away character, Harley proved so massively popular with the DC fanbase that she was ultimately brought into DC Universe continuity in the 1994 graphic novel “Batman Adventures: Mad Love” which recounted her wacky origin tale, and was written and drawn by original co-creators Dini and Timm.

Harley of course has, since that time, become a force to be reckoned with both in and out of the comic book world, starring in both animated and live action movies, and is also without a doubt, THE most most popular choice for depiction amongst cos-players across the globe. 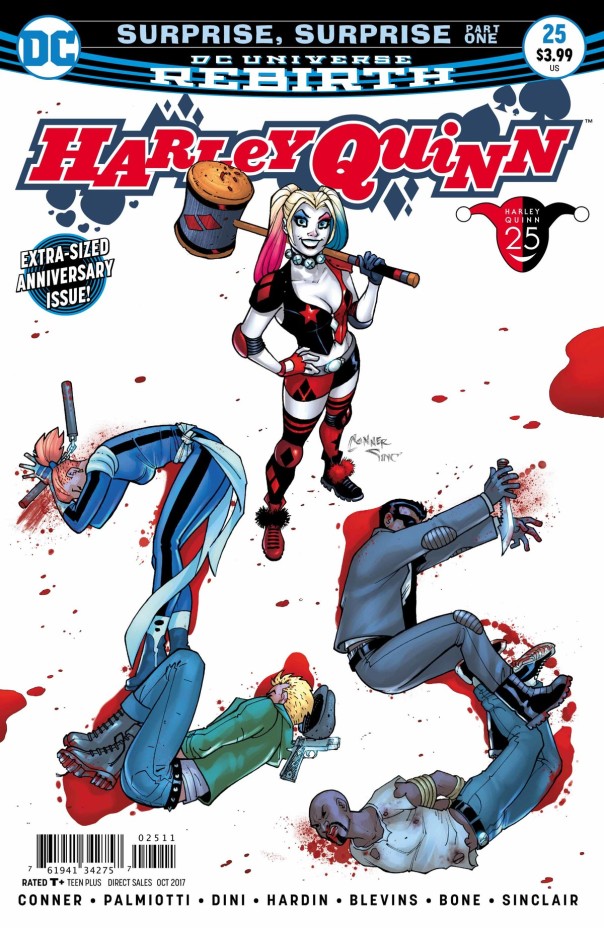 Amanda Conner Never Fails To Astonish With Her Fantastic Cover Art – Masterful Writer And Sublime Artist… Is There Nothing This Talented Lady Can’t Do!?

This really is one of the funniest HQ comics released to date, an hilarious issue packed with action, suspense, sentimentality… and beaver jokes (well of course there are beaver jokes… it’s a Harley comic by those masterly mirthful maestros Amanda and Jimmy!) In fact, as great as all the tales jam packed into this issue are (Paul Dini making a triumphant return to his creation obviously being a stand out) it was the ridiculously brilliant birthday chapter by Amanda and her hubby Jimmy that I enjoyed the most. I mean, let’s be honest, BEAVER jokes are sooooo childish and ever so slightly politically incorrect but, under the direction of the dynamic duo of Amanda Conner and Jimmy Palmiotti they are hilarious and had me giggling and snorting like a school child (much to the consternation of the other patrons in the cafe I was reading it in!!)

Enough Already!! My Ribs Are Beginning To Ache!!! 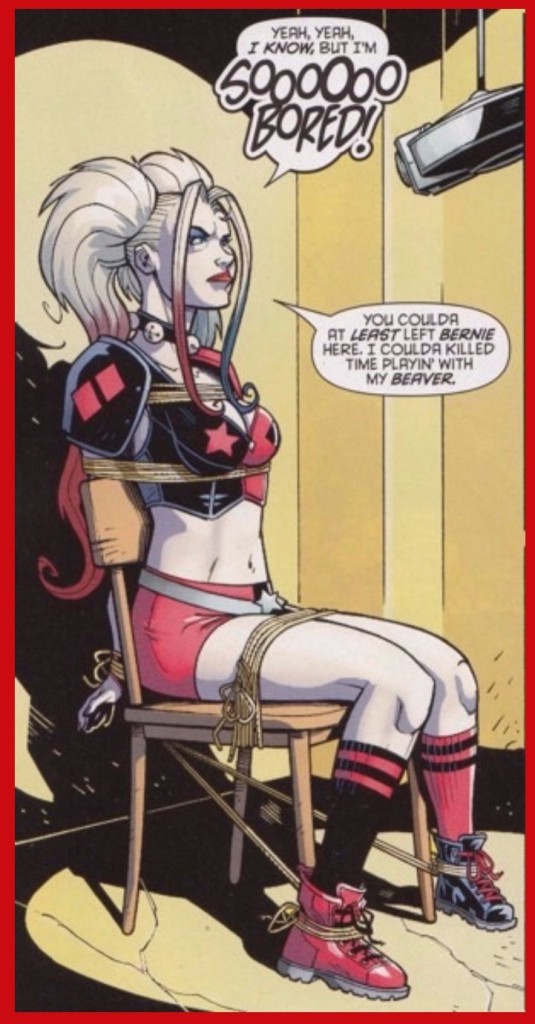 OK, OK Fellow Cafe Patrons, I’m Laughing And Crying Because This Is An Extremely Funny Comic, I’m Not Mad… Promise (Then Again, I’m Laughing Out Loud In A Public Place About Beaver Jokes… Soooooo)

(Please Note: No beavers were hurt during the writing of this post… just tossed, stuffed, kidnapped and made fun of… so that’s OK then!)