Welcome fellow agents of Precinct1313 to another episode of The Week In Geek, where we love to share our favourite, Comic Book, Video-Game, and Cult Movie news for your perusal and pleasure. And so once more unto the geek dear agents, once more…

Not only did the Galaxy’s Greatest Comic – 2000AD reach it’s 40th anniversary milestone this year, but this month also brings us four decades of ol’ stony face himself, grim lawman of the future, the inimitable Judge Dredd. That’s right fellow fans of fantastic fiction, the UK’s biggest ever comic book star has been busting perps and incarcerating crooks for a fantastic forty years!

Dredd made his first appearance in prog #2 of 2000AD in March 1977, created by John Wagner and Carlos Ezquerra, and became an instant hit with UK comic book fans, finally we had a character who could stand toe to toe with his American peers. Like many stories emanating from 2000AD, Dredd was an extreme satire of British culture and politics, often taking these themes to ridiculous extremes (though possibly not so extreme, considering the unfortunate direction that the UK has taken in the past year) 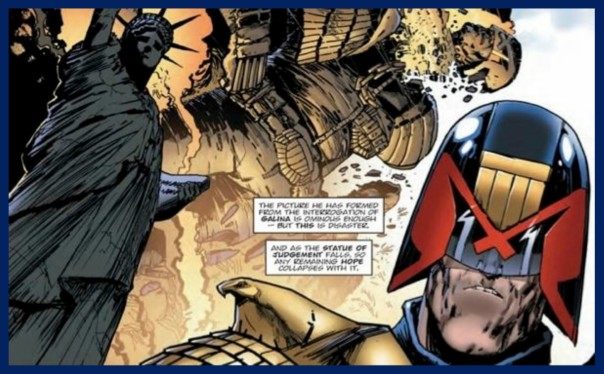 Dredd is the most infamous of the Judges who patrol the future city of Mega City One, riding his Lawmaster motorcycle through it’s mean streets and conferring justice utilising his Lawgiver sidearm. Judges literally are the law… judge, jury and executioner, dispensing justice as they see fit with complete autonomy, save their Book of Law. Dredd is one of the (very) few characters to have become successful outside of the British isles, and has always served as a harsh parody of how the world could end up lest it reins in it’s inherent fears and prejudices. Happy Birthday Joe, here’s to another 40!

Zelda: Breath Of The Wild Hailed As “Greatest Game Of All Time!”

Nintendo’s new hybrid console “The Switch” is now amongst us (well, at least the lucky few who pre-ordered the device, such is the way with new Nintendo machines… unfortunately!) and with their new machine comes a brand new entry in their (arguably) most popular series… Zelda, and the gaming media is going crazy for it!

Currently sitting with an astonishing ’98’ overall rating on Metacritic, it seems the professional game reviewers can’t get enough of Ninty’s magnum opus… with even the notorious, critically harsh gaming magazine, Edge giving it an incredible ‘100’ rating, that’s right… Edge!!

The Legend Of Zelda is an action RPG originally released on the Nintendo Famicom in 1986, designed by Shigeru Miyamoto and Takashi Tezuka. The series protagonist is a small elven boy named Link, who, at the start of virtually every game would be roused from slumber and tasked with saving Princess Zelda and the kingdom of Hyrule, from the evil shenanigans of chief antagonist, Ganon.

What makes Breath Of The Wild so different from it’s forebears though, is it’s abandoning of specific gaming tropes from previous iterations, the impressively vast world is entirely open to you from almost the get go, no slingshots, boomerangs or bombs holding you back from unlocking new areas, like earlier incarnations of the game. The physics are astounding, the graphics are gorgeous,with a rousing soundtrack and an infinite things to do, maybe this is the greatest game of all time.

Why not join us next time friends, for more Week In Geek…