Nightwing Steps Out Of Batman’s Shadow… 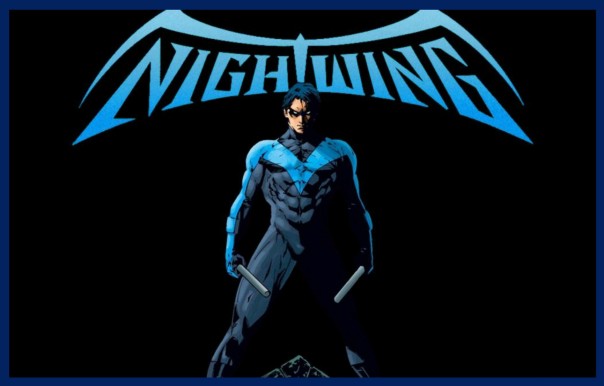 We love The Batman here in the Precinct, we really do, but let’s be honest he has hogged the limelight when it comes to big screen appearances over the decades. Now we can understand why DC Comics have utilised the Caped Crusader so much in films over the years, I mean he is quite possibly THE most popular comic book character ever created, but his intrinsic lore includes many other fantastic creations that haven’t honestly been given a fair shake of the escrima stick! And one of the most beloved of the bodacious Bat Family is Richard Grayson, aka Nightwing.

Warner Bros announced this week that Batman’s one time sidekick will be getting his very own movie, which will slot right into DC’s burgeoning extended cinematic universe. Dick Grayson is the character who first took on the mantle of Robin in 1940, after his family was murdered (the acrobatic team known as “The Flying Graysons”) he was adopted by Bruce Wayne and inducted into the dangerous world of costumed crimefighting.

Dick left his position as Robin in 1984, taking on the role of Nightwing. Strangely enough the original holder of this title was Superman! When the Kryptonian Superhero and his pal, Jimmy Olsen found themselves stranded in the Kryptonian City of Kandor (famously miniaturised and stolen by the villainous Braniac) they adopted the identities Nightwing and Flamebird, and became Kandor’s costumed saviours.

After the venerable 80’s “Crisis On Infinite Earths” reboot, the original character of Nightwing was re-imagined as a masked vigilante from Krypton, whose legendary background served as the inspiration for Dick’s choice of identity.

Now those of you who have seen the outstanding ultimate edition of Zack Snyder’s criminally underrated “Batman v Superman” will have noticed the glass tube containing the Robin outfit, with the words “Ha Ha, Joke’s On You Batman” scrawled on it, this is famously tied in to the death of Dick’s replacement as Robin, Jason Todd, who was bludgeoned to death with a crowbar by the Joker in the classic “Death In The Family” storyline from 1988. Which means if Jason Todd’s version of Robin existed in the DC Cinematic Universe, then Dick accordingly must have also.

No date has been set as of yet for the film, but we do know that scripting duties are being handled by Bill Dubuque, who wrote the Ben Affleck starring “The Accountant” and is to be directed by Chris McKay, who recently delivered the fantastic “Lego Batman Movie”. This really is exciting news for DC fans, as it opens up the possibility for more varying characters from DC’s huge roster of heroes and villains, my personal favourite Robin was the aforementioned Jason Todd, who re-emerged from death’s cold embrace after being submerged in Ra’s Al Ghul’s life giving Lazarus Pit and became the scourge of Gotham’s underbelly as the violent masked vigilante Red Hood. If Nightwing is successful we may just end up getting a visit from that particular sociopathic guardian of the night.

Red Hood Wants In On The DC Cinematic Universe!… And He’s Not The Type To Take No For An Answer!!