← “Holy Return Of The Caped Crusaders, Batman!”
Precinct1313’s Comics From The Future: Frostbite → 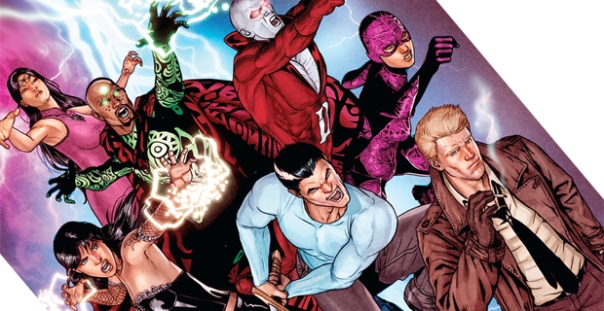 “If there’s something strange in your neighbourhood, who you gonna call…” certainly not the Ghostbusters, they wouldn’t stand a literal hope in hell against the aberrant abominations and mystical miscreants that haunt the dark side of DC Comics, no, this is unreservedly a job for that phenomenally preternatural group of magical Superheroes known as Justice League Dark.

Justice League Dark was first introduced in 2011, though the characters contained within this uncanny cabal have been around for decades. The original line up as introduced to us by series creator, the inimitable Pete Milligan consisted of – Zatanna, John Constantine, Madame Xanadu, Black Orchid and Shade the Changing Man. The JLD initially formed after ancient witch Enchantress (recently seen haunting the silver screen as a protagonist in the astounding Suicide Squad movie) defeated DC’s premier team of costume clad Superheroes The Justice League. Their defeat by the supernatural powerhouse, necessitated the creation of a mystical team of heroes to deal with the emergence of paranormal Supervillains.

DC have long touted the occult team with a big screen appearance, with legendary director Guillermo Del Toro attached as director (Del Toro is a huge fan of the original comics) but his excessively busy work schedule has meant that the long waited mystical movie has languished in limbo. Until now… DC‘s parent company, Warner Bros have announced that Bourne Identity and Edge of Tomorrow director Doug Liman has taken up the ghostly reins and will be directing the Dark Universe alongside Del Toro who will act as producer for the eerie epic.

With this announced alongside the upcoming animated version of Justice League Dark, it seems our favourite group of esoteric heroes will finally step out of the darkness and into the light, of the silver screen.

← “Holy Return Of The Caped Crusaders, Batman!”
Precinct1313’s Comics From The Future: Frostbite →