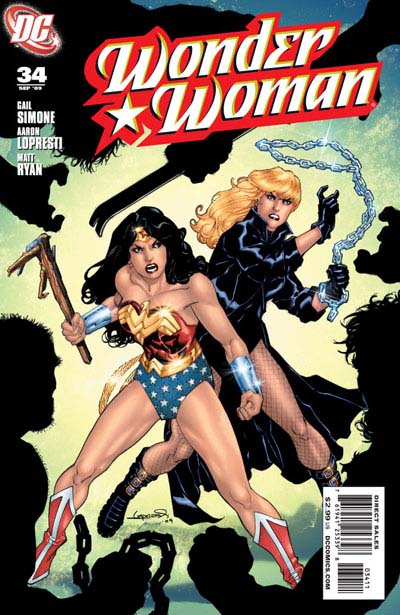 Our torches flicker white hot incandescence across the walls of the ancient Amazon archives as we continue our research into the millenia long annals of the Olympus created Amazon race. We have descended vast depths since beginning this investigation, floor after floor of extensive libraries detailing every facet of the venerable Amazons and their feats of great valour, which are then regaled to you through – ‘Classic Wonder Woman’  Precinct1313’s comic cover countdown to the 75th anniversary of Zeus’ favoured daughter.

This weeks tantalising tome is brought to you by those veracious virtuosi of comic book excellence – Gail Simone, Aaron Lopresti & Matt Ryan. Released in September 2009.

After her titanic struggle against the unremitting foe Genocide and a sorrowful departure from her home of Themyscira, Diana returns to her apartment in Washington DC. It is here she learns that Genocide is still alive, though broken and is being harboured by Dr Psycho in Japan, Psycho is using an underground Meta-Human fight arena as cover whilst he sets about returning Genocide (who is actually the corpse of Wonder Woman, stolen by Ares in the future and corrupted to become Genocide) to full power.

Diana consults fellow Justice League member Dinah Lance (better known as Black Canary) about her dealings with illegal operations such as Psycho’s fight den, who gleefully agrees to join Diana on her mission to infiltrate the Meta-Human arena as competitors. Cue another fantastically written tale by the talented Gail Simone, the quirky tale follows our two celebrated heroines on a journey through zany Japanese culture and even comparisons of Super female bust sizes(!?)… Of which the plentiful Power Girl comes out on top… of course!

I love this run of Wonder Woman by Gail Simone, in my opinion it rivals all the greats that came before and after it including George Perez and the more recent saga by Brian Azzarello. Simone just ‘gets’ the character like no other, it helps also that her talent runs the gamut of both deep dramatism and incredibly funny comedy. Rounding this series off perfectly are Aaron Lopresti’s fantastic visuals, his characters exhibit real emotion and his articulation of facial expressions in his art is worthy of the great Keith Giffen himself, and that is high praise indeed.