Danish actress Connie Nielsen has been officially cast in the iconic role of Hippolyta, Themysciran Queen and mother to Wonder Woman. Connie Nielsen is best known for her role as Lucilla in Ridley Scott’s “Gladiator,” but has also starred alongside John Travolta and Samuel L Jackson in “Basic,” and Tim Robbins in Brian De Palma’s “Mission To Mars.” 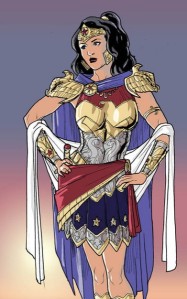 Hippolyta made her first appearance in “All Star Comics #8” in 1941. Created by William Moulton Marston and Harry G. Peter, she is the Queen of the Amazons, ruling the immortal race of Greek warrior women from the paradise island of Themyscira.

The Amazon Queen has undergone a few revisions in origin over the years, but in current continuity Hippolyta and her sister Amazons were created by a select pantheon of the Greek gods that included Hestia, Athena, and Aphrodite from the souls of women slain by men throughout the millenia, with Hippolyta herself over 3200 years old. Hippolyta is both a shrewd diplomat and skilled warrior, and bore her daughter Diana from a romantic entanglement with Greek God of Gods – Zeus.

Wonder Woman is currently filming in the UK and Italy, with actress Gal Gadot starring as the Amazing Amazon and Chris Pine as Steve Trevor. Due to be released in 2017.