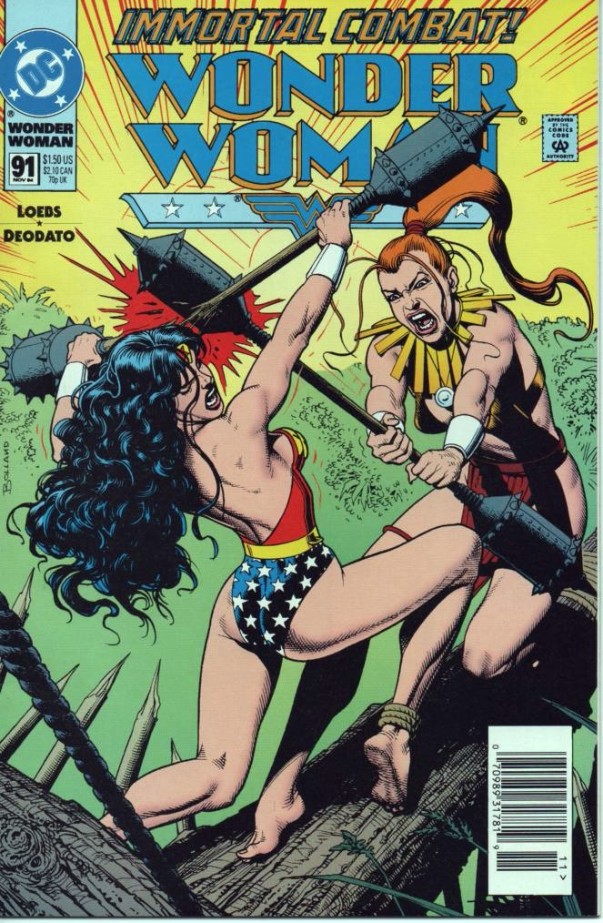 Greetings fellow fans of the amazing Amazon, and welcome back once more to “Classic Wonder Woman” Precinct1313’s weekly comic cover countdown to the 75th anniversary of Diana Prince. Fresh from our dive into the Amazon archives, we surface this week with “Wonder Woman (volume 2) #91.” Written by: William Messner-Loebs. Interior art by: Mike Deodato Jr. Cover art by: Brian Bolland. Released in November 1994.

The tantalising tale hidden behind the remarkable Bolland cover is called “Immortal Combat” and is the third part of a five part mini-series entitled “The Contest.” 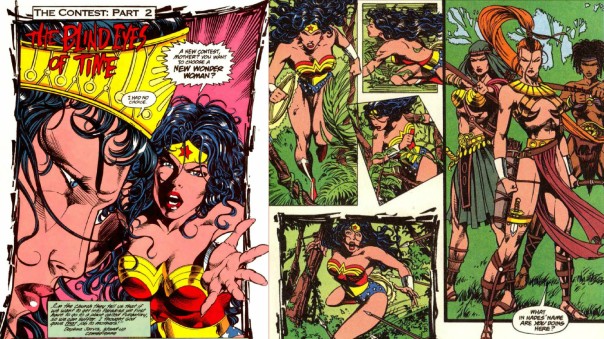 After discovering that malevolent Witch-Goddess Circe was responsible for the disappearance of her paradise home of Themyscira, Diana forces her to to return the island and her Amazon sisters. Upon returning to the island, she discovers the buildings therein have been demolished and is promptly shot at with an arrow from a mysterious assailant. When Diana finally locates her sister Amazons, she is regaled with the story of what happened during Themyscira’s disappearance.

The island was assaulted by the Amazons of Bana-Mighdall, and a massive tribal war broke out between the two Amazonian factions, during the altercation Circe appeared before the Amazons to reveal that she was responsible for the contention and she brought the dissenting Amazons tribes together so she could destroy them. Circe transports Themyscira to a demonic dimension, and the warring Amazon tribes put aside their differences to fight against this new threat. Though Themyscira had seemed to be gone for only a few short months, time differentiation in the demonic realm meant that the Amazons fought their war against Circe for close to a decade. 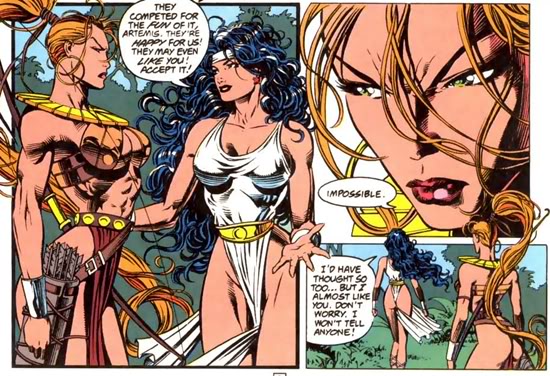 Diana embraces her Mother, Queen Hippolyta jubilant to see her unharmed from the conflict, but Hippolyta’s manner seems remote and distant, asking her daughter how her mission to man’s world is progressing, she becomes hostile when Diana tells her that progress has been slow. Angry at her daughters inability as Amazon herald, she orders a new contest be held to determine whether another Amazon is more capable of the appointment. Artemis of the Bana-Mighdall Amazons steps forth to announce her intention of becoming the new herald, though Hippolyta initially refuses any member of the splinter group of Amazons take part in the ancient tradition.

Join us again next week for another classic WW cover, my achaean Amazonian associates!