We spend most of our time in the Precinct writing about the heroes and villains that inhabit the pages of DC’s comic-book universe, in fact about 90% of the posts originating from us are about this classic company’s plethora of characters.

I first discovered Superheroes through DC after being bought a copy of Detective Comics by my Mum at the tender age of six, it was here that I came across the character that has had the biggest influence on me as I have grown up… Batman. I continued to read nothing but Batman stories up until the age of 9, when I decided to branch out and leave my comfort zone of Gotham City, and travel to a place that was as far removed from that festering crime-ridden city as could be… Themyscira, home of the fabled Amazons and of course the world’s first ever female Superhero… Wonder Woman.

Now, now, no need for fighting amongst yourselves, we love you both equally here in the Precinct

With all that said, being English, I also grew up reading and collecting the characters that came out of a popular British comic-book called 2000 AD, these home grown dramatis-personae were very different to the spandex clad heroes who populated the books I avidly collected from DC. I always found that these characters originating from the land of my birth were (though this is only true of the late 70’s and very early 80’s) darker, edgier and definitely more derived from what was happening in the UK on a weekly basis, be that through political or trendsetting issues.

Characters like Judge Dredd, (even though the stories were based in a fictional dystopian USA) were directly influenced by the politics and social movements of late seventies and early eighties Britain. Dredd himself was a correlation of what the people of the UK in the eighties believed the country was becoming; a police state, plus the rise of the anti-establishment punk rock movement that originated from Britain in direct defiance of how the government were running the country at the time, George Orwell’s classic dystopian novel “1984″ seemed to be coming true (in fact, the UK has the largest amount of street surveillance cameras in the world.)

Now then, this isn’t a politically motivated piece (politics bores the hell out of me, to be honest) just a small background on why, I believe, that the heroes and villains that leapt out of the pages of British comics were so different from their US counterparts. Alan Moore’s masterpiece “V for Vendetta” captured this sentiment perfectly, an amazing amalgam of everything that was believed to be taking place, and how at the time (and maybe still today, to some extent) the people of this sceptred Isle felt about the direction the country was taking. 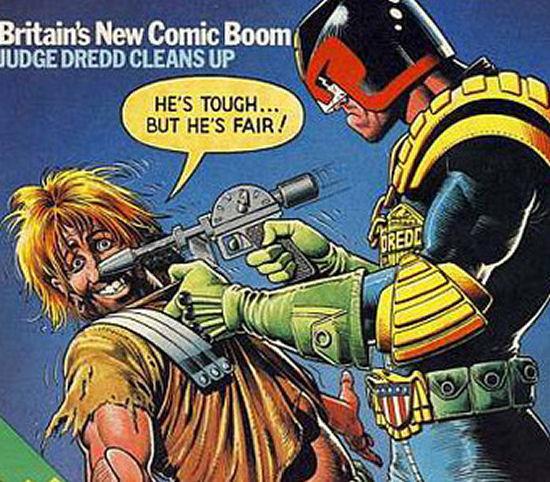 Now that the lengthy preamble is done, we can concentrate on the interesting things this hopefully weekly series will bring you, my loyal and avid readers and blogging friends… cool comic characters from this tiny island we call the United Kingdom. So stay tuned, in our next instalment we shall examine the popular rise of the British comic-book industry and its first foray into the realm of the Superhero. Until next time, or as Tharg The Mighty would say “Splundig Vur Thrigg.”