← Robin The Boy Wonder: A Celebration Of 75 Years
Comic Cover Of The Week: Convergence – Suicide Squad #2 →

Welcome back once more to another instalment of, Classic Wonder Woman, Precinct1313’s weekly comic cover countdown to the 75th anniversary of everyone’s favourite Amazon warrior. This week we present to you; Wonder Woman #286, written by Robert Kanigher, with interior and cover art by Ross Andru, Dick Giordano, Jose Delbo and Dave Hunt. Released in December 1981.

The tremendous tale hidden behind this classic cover is titled “Be Wonder Woman… And Die”, in which Diana gives an up and coming actress, who wants to portray Wonder Woman in a movie, a chance to play her in real life to give the film role more perspective. The cover depicts Queen Hippolyta cradling the Wonder Woman actress, who was accepted as an Honourary Amazon sister shortly before her untimely demise.

Hippolyta (aka, Hippolyte), is the legendary Queen of the fabled Amazons, who made her first appearance alongside her daughter Wonder Woman, in All Star Comics #8 in December 1941. Based on the Greek mythological character of Hippolyte, who was the Amazonian Queen fathered by god of war Ares.

There have been two major versions of her origin, the original golden age variant of her origin we touched upon in an earlier instalment of Classic Wonder Woman, which you can read right here.  After Wonder Woman underwent a revamp by the legendary George Perez in 1987, Hippolyta’s own backstory also changed. Hippolyta, her sister Antiope and the rest of the Amazons were created by the Gods of Olympus, Artemis, Hestia, Athena, Demeter and Aphrodite, who took the souls of warrior women who had been slain by the hands of man over the centuries and formed them initially out of clay, before granting them life as immortal Amazon warriors. Hippolyta herself is believed to be at least 3,000 years old. 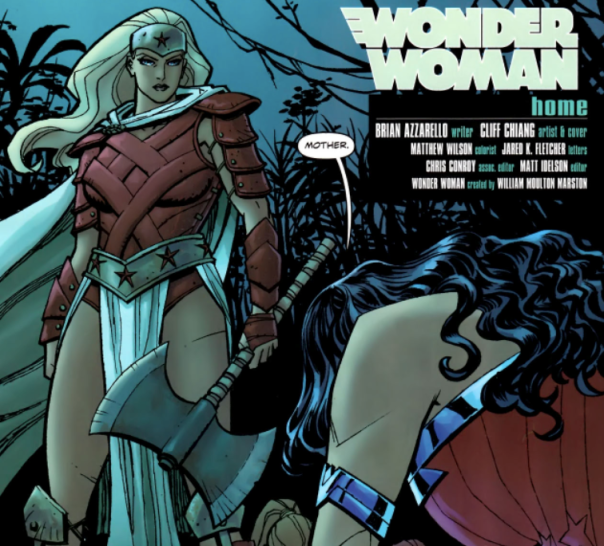 A recent reboot of Wonder Woman in DC Comic’s  “New 52″, also brought another change for the Amazon Queen. Blonde and edgy, this version of Hippolyta is more the fierce warrior than a diplomat and mentor as her previous incarnation. Also this version of Hippolyta didn’t fashion Diana from clay, but fell pregnant after having an affair with Zeus, and was eventually punished for her transgression by Zeus’ wife Hera, and turned to stone.

Join us again next week for another classic WW cover, my admirable Amazonian associates!

← Robin The Boy Wonder: A Celebration Of 75 Years
Comic Cover Of The Week: Convergence – Suicide Squad #2 →