In June 2004 DC comics released the first issue of Identity Crisis, penned by Eisner award winning writer Brad Meltzer with interior art handled by Rags Morales, it went on to become one of their biggest ever selling mini-series. Spiralling out of previous series – Crisis on Infinite Earths, which shook up the continuity of the DC universe, this is an emotional and moving drama that deals with murder, betrayal and the eventual breakdown of relationship between the major Superheroes of the Justice League. 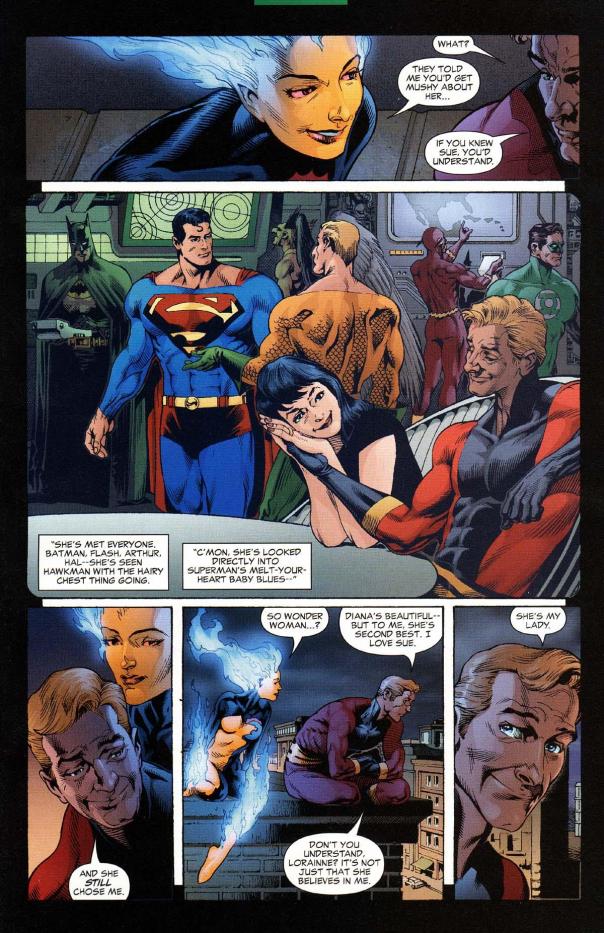 When Sue Dibny the wife of elasticated Superhero Elongated man is found murdered in their apartment, the Superhero community at large comes together to solve her tragic death. With Supervillain Doctor Light being the prime suspect after Green Arrow admits to the Flash and Green Lantern that Dr Light had previously raped Sue, which caused magic maestro Zatanna to wipe Light’s mind and change his personality to prevent him from ever doing this again, they go after the crazed Supervillain.

When Dr Light suddenly regains memory of this event, enraged he seemingly murders Sue Dibny in retaliation…with the Justice League closing in, Light hires super mercenary Deathstroke for protection. This makes for one of the greatest showdowns in comic history as the Justice League (sans Batman, Superman and Wonder Woman), clash with Deathstroke and end up underestimating the worlds’ most dangerous mercenary!

The Justice League are about to have a very bad day!

The subject matter of Identity Crisis is very dark and at times rather disturbing, the conflicts between the Superheroes themselves are emotionally scarring and far reaching into later comic series. This is a rollercoaster ride of a series with everything thrown at the reader, and a twist at the end that you will not see coming. Awesomely crafted by Brad Meltzer and Rags Morales, both of them doing some of their greatest ever work. We also get the death of the current Robin – Tim Drake’s father, with an amazingly emotional panel of mentor Batman comforting the now orphaned teenager, paralleling his own tragic circumstances.

The Identity Crisis saga can be bought as a collected works trade paperback, and is highly recommended as one of the greatest pieces of comic-book storytelling since Watchmen or the Dark Knight Returns, and like those previous stories the content matter is very dark, so caution is advised.

Precinct1313 Rating: 5 Beat-Down Superheroes Out Of 5