It’s time to step cautiously once more into that sinister Raccoon City mansion, as S.T.A.R.S veterans Jill Valentine and Chris Redfield revisit their greatest adventure from the Resident Evil/Biohazard franchise. 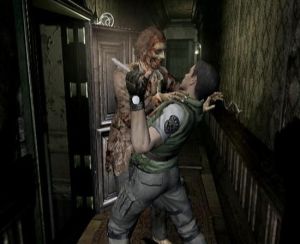 “I keep telling you Resi 6 was not my fault..can you please stop choking me now!”

That’s right ‘master of unlocking’ fans, the 2002 gamecube remake of the 1996 survival horror classic by Capcom is being remade for current and last gen consoles. The Shinji Mikami helmed zombie blasting spook-fest will be available in early 2015 as a digital download for Xbox 360, Xbox One, PS3, PS4 and PCCD, with all new visuals and 5.1 surround sound, plus the Xbox One, PS4 and PCCD versions will be remastered in glorious 1080p. 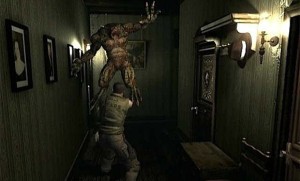 “Resi is being remade?..high five dude!”

The original Resi is by far the the best of the long running game series, though there have been other classic entries in the series..we particularly liked the new direction that Resident Evil 4 took back in 2005, others deserving of mention are Resi 2 and Code Veronica. Though of late Capcom have come under fire for slowly moving Resi away from it’s horror roots and turning the games into more generic third person action-fests, hopefully this release will sell well enough that Capcom can return the series to its survival horror origins.